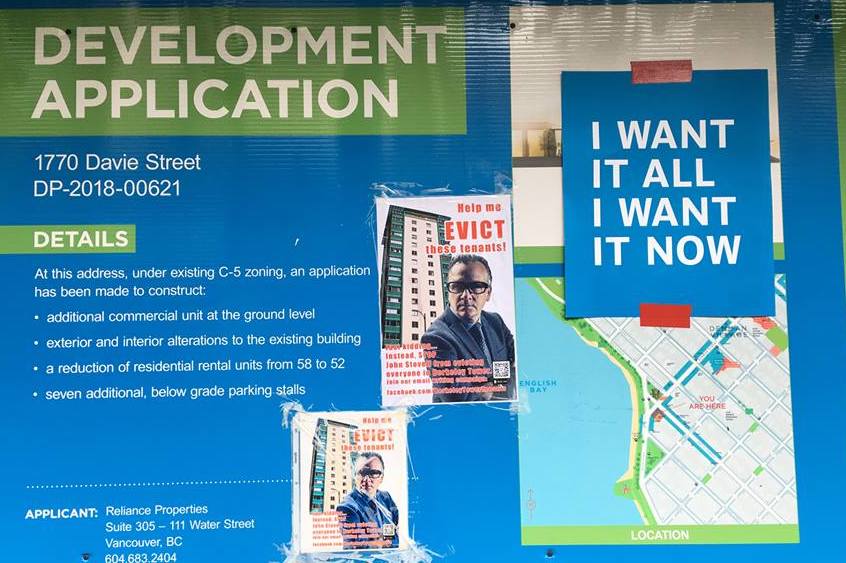 A Perspective from a Renovicted Tenant Who Qualifies for TRPP

Last year, I began to learn a lot about “renovictions” when my 50+ neighbours and I learned we were being renovicted from our long-time home - Berkeley Tower in the West End. To our dismay, neither the Province nor the City of Vancouver had adequate policies to protect tenants from the predatory practice of evicting renters under the guise of repairs in order to dramatically raise rents. The Tenant Relocation and Protection Policy (TRPP) seemed to be the only measure that addressed this issue. Unfortunately, instead of emphasizing the need to keep tenants in their homes, the TRPP puts an emphasis on helping landlords and developers pay tenants a pittance to leave. For many of us at Berkeley Tower, the amount being offered meant most of us would have to leave our neighbourhood, and our city, forever.

That is why last year I spoke in favour of Clr. Swanson’s Motion B10 - "Protecting Tenants from Renovictions and Aggressive Buyouts". A watered-down version passed, but the City needs a Charter amendment to implement measures aimed at tenancy issues. Our Mayor and Council promised to ask the Province for that amendment.

The Charter - It’s all about “Jurisdiction”

The Vancouver Charter is a Provincial statute passed in 1953 which supersedes the Vancouver Incorporation Act and grants the City different powers than other communities have under BC's Municipalities Act. The current Charter does not give City authority to regulate occupancy through a by-law, nor authority to apply TRPP to building permits. These key exclusions allow the vast majority of renovictions to proceed unchecked.

On Dec 20, 2018, a few weeks after council approved Motion B10, Mayor Stewart wrote to Housing & Municipal Affairs Minister Robinson for help from the province. Her response on Jan 21 confirmed that she is prepared to give the City greater clarity about how landlords will be obligated to maintain tenancy if tenants are willing to deal with renovations. But with the ball in its court, the City has still not asked the Province for that Charter change.

By not asking, the City can claim that there's nothing they can do because they don't have jurisdiction. Their unwillingness to ask for a Charter change points to an unwillingness to actually fight for tenants' rights.

There is no honest reason that tenants can't be rehoused at the same rent, while the developer makes up the difference through other units rented at market price. The city of Burnaby is proceeding with this policy under their new protections. However, in Vancouver there is still no city-level authority to question developers when they claim vacant possession is required (either for much higher rents or speculation), to fine repeat offenders, or even to enforce its own TRPP for displaced tenants! Because of this, City Planners will support developers' private dealings with tenants slotted for eviction.

The Updated Protections: More Buyouts instead of Security

The recently increased buyout compensation in the updated TRPP is still not a deterrent for eviction. Buyouts bleed out our affordable housing stock and don't help tenants who can't afford current market rents. A small one-time payment is not a solution to displacement. Yet the City further absolves themselves of responsibility for what is actually going on, while residents with no real option to stay drain out of the city.

The old TRPP didn't do a single thing to stop or even curb renovictions, but developers were held somewhat responsible for relocation on their dime to a similar tenancy in one of their other buildings. Even then the Charter issue meant there were no legal assurances, but at least in 2015 the policy was to offer three housing options within 10% of current rent for all displaced tenants (see Figure 2).

It next became three options within CMHC rates for all displaced tenants, already a hefty added burden out of pace with incomes. Now, the new TRPP doesn't assure relocation at all for average to lower income families. Affordable relocation due to a development permit is only offered to households that earn less than $30,000 altogether, and these families can now expect to be relocated to BC social housing on the City’s dime. Everyone else can expect to pay double or triple their current rent-controlled rate, and some will even be forced to give up their pets.

Further, the new TRPP doesn't offer a meaningful right of first refusal (ability to return to the same suite, for the same rent, after the renovations are complete), although it is already within the City's power to require it as part of the developer’s housing agreement. The City hasn’t moved an inch for tenants from their previous position on this either, sticking with a new tenancy agreement at 20% off the market rent as chosen by the landlord. And if your building is within a commercial zone you don’t even qualify for that!

The City needs to be accountable for giving out permits that automatically trigger provincial eviction notices. They must operate under the spirit of the Tenancy Act guidelines. Suites should not be forcibly vacated for renovation just because it’s quicker and cheaper, and it certainly should not be used to force people out of their current tenancies forever.

- Carol Korm is a VTU member and resident of Berkeley Tower 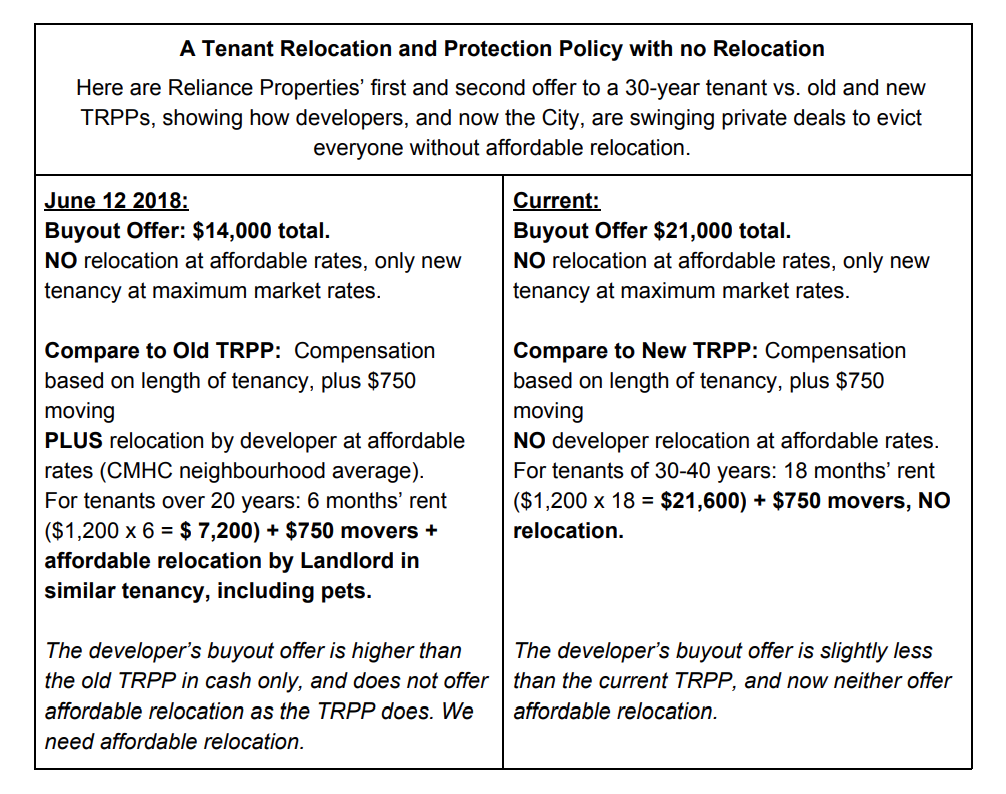