Vancouver Council Expands Tenant Relocation Policy - But Not Much Else 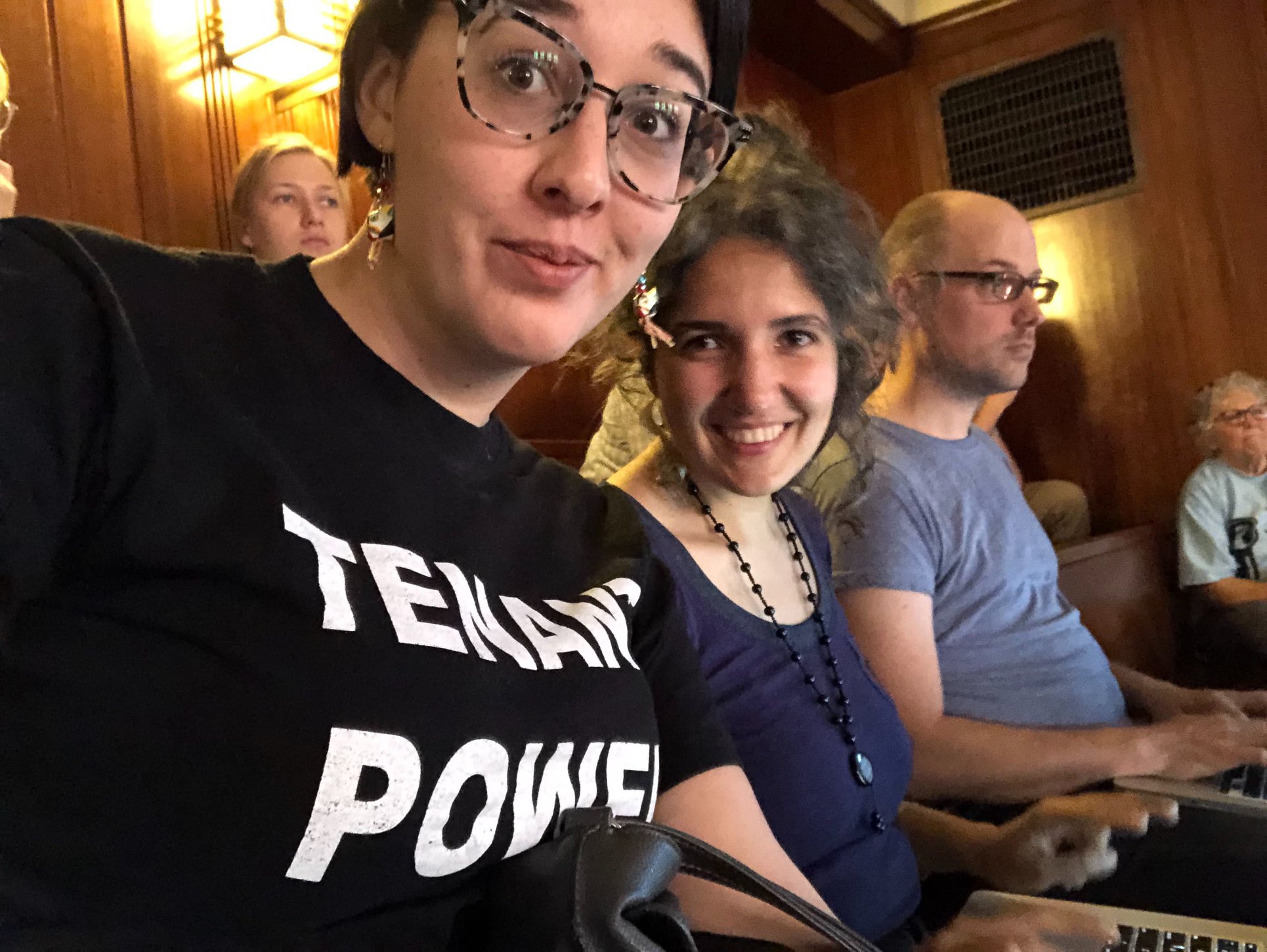 The Final Report Back:

Several dozen VTU members packed the City Hall on the morning of Tuesday, June 11, to support passing the changes and demonstrating to council that tenants are still here and watching. A dozen tenants spoke as well about the important shortcomings of the report back.

In particular, tenants were disappointed that the TRPP will still not apply to all rentals, including all secondary suites and rented condos. There is also a large loophole in the coverage of TRPP which excludes tenants who move in after a development permit has been applied for.

Unlike the new policy proposed in Burnaby, the report does not adopt or acknowledge the importance of granting tenants a meaningful right of first refusal to return to the renovated or redeveloped unit at below-market rates. It is easily within the City's jurisdiction to do this.

The report also suggested revoking landlord business licenses but to target general illegal behaviour under the RTA, but not to stop renovictions specifically, like in New Westminster.

Furthermore, staff recommended against vacancy control (just as the provincial Rental Housing Task Force did), despite the fact that tying rents to units would be the strongest policy to discourage landlords from pursuing profit-motivated renovictions. Although the policy exists in Manitoba, PEI and Quebec, the report erroneously stated that no jurisdiction in Canada currently has vacancy control. (Sign our real rent control petition if you haven't yet)

The TRPP changes passed unanimously, bringing our mini-campaign for expanding TRPP to a close (thanks to everyone who signed the petition).

Mayor Kennedy Stewart was quick to brag on Twitter that the new protections were "the strongest in Canada". 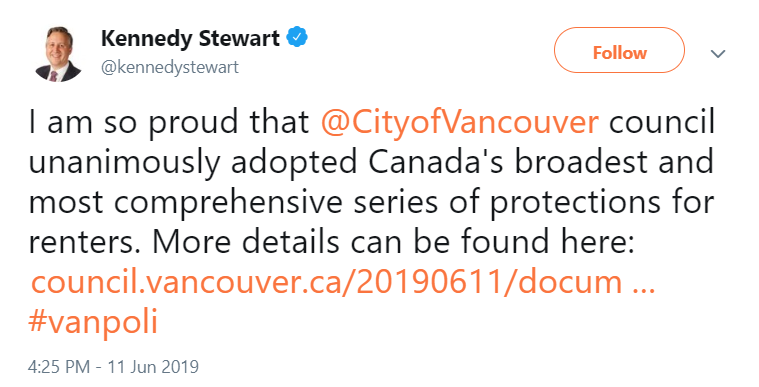 However, the boldest provisions of Swanson's original motion were gutted to appease landlord and developer interests. Rather than implementing measures to deter renovictions (as has been proposed and legislated in neighbouring New Westminster, Port Coquitlam, and Burnaby), Vancouver has instead doubled down on a policy which formalizes and legitimizes the process of paying to displace tenants.

The following day, the annual Vancouver Homeless Count stats were released - with homelessness at an all-time high. 81% of people counted had been living in Vancouver before becoming homeless (likely renting), and more than 44% had been homeless less than a year. This indicates that despite ramped-up local and regional efforts to house people, Vancouver's most vulnerable populations (disproportionately indigenous people, and increasingly, seniors) are losing their homes at a faster rate than the government has been able provide new housing. This further demonstrates a failure to recognize and seriously address the crisis of sky-high rents, renovictions & demovictions causes homelessness.

Although the protections that passed were watered down, VTU members have learned valuable lessons from this new council since first mobilizing around Cllr. Swanson's motion last year. There is still much to be done to build tenant power, and with each step we make it harder for landlords, developers and politicians to ignore our collective voices.

To add your voice to this collective and help us push for changes we need municipally, join our City Hall Working Group.

Later the same week, Mayor Kennedy Stewart helped the NPA bloc (minus Councillor Hardwick) force a premature vote and defeat an important motion (again from Cllr Swanson) that would have protected rental housing along main arterial roads from demovictions. The motion that saw dozens of impassioned tenants (and 4 panicked developers) speaking to it late into the night. Remember who voted against it: 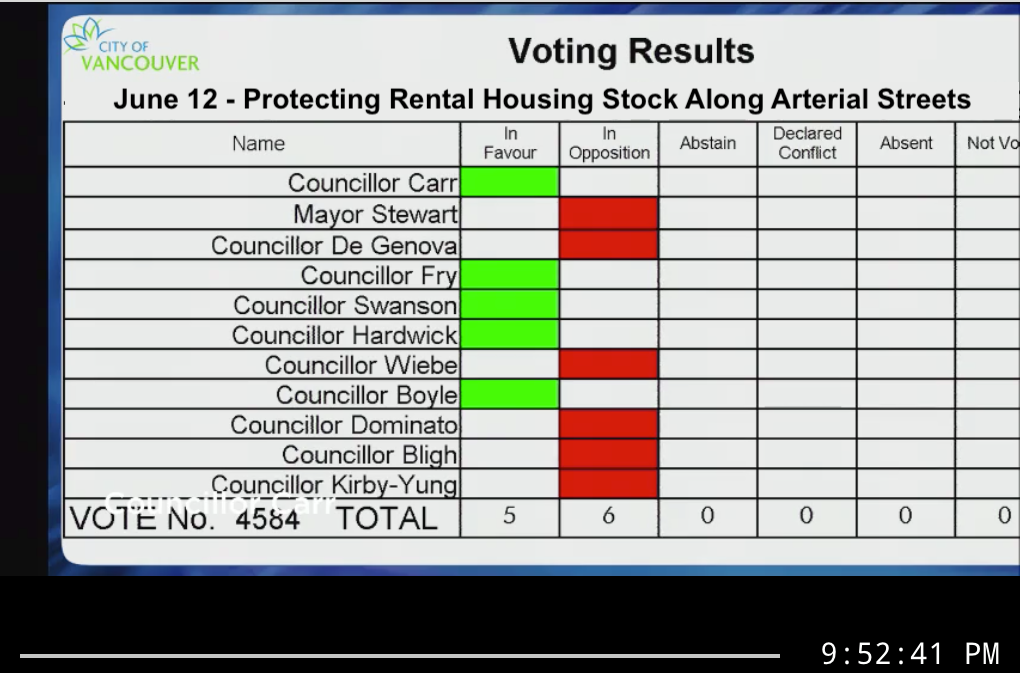 The next morning, Stewart was the featured speaker at the Annual General Meeting of the Urban Development Institute (the Real Estate lobby).