Five months on from the disappointing Rental Housing Task Force report, provincial government drags its heels on action against renovictions and other tenant protections 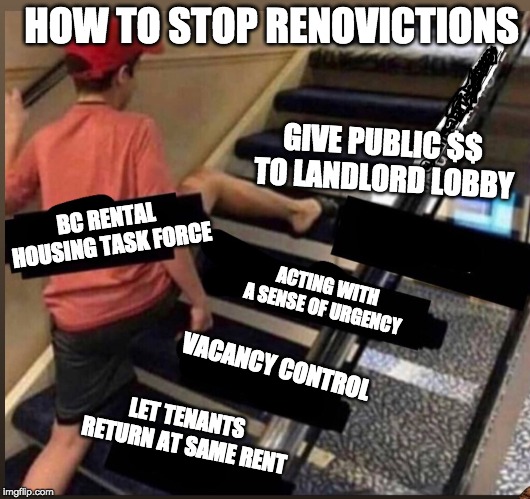 Speaking to an audience of reporters and stakeholders, Minister of Municipal Affairs and Housing Selina Robinson and Rental Housing Task Force chief Spencer Chandra-Herbert yesterday announced their plans to implement the Task Force’s December 2018 recommendations. On their release, these recommendations were considered by many to offer little for BC’s renters in crisis. Five months on, unfortunately little has changed.

Background:
Prior to this Task Force, Chandra-Herbert, MLA for the renter-heavy Vancouver-West End riding, had made some strong statements in favour of expanded tenant protections. In 2011, he introduced an amendment to the Residential Tenancy Act to close loopholes in the right of first refusal and remove the much abused geographic area rent increase. While the right of first refusal provisions did not pass, Chandra-Herbert’s 2011 proposal hinted that an NDP government would understand the potential abuses under the Act and be committed to resolving them. Throughout the Rental Housing Task Force consultation process, however,  it has become clear landlord profits are still given the same - if not greater - priority as tenants’ rights. Tenants rightly see this softening in rhetoric as a symptom of the misguided “balanced” approach taken by the Task Force in drawing up its recommendations.

Rejecting widespread calls for a system of vacancy control in BC, the Task Force recommendations offered few solutions for combating renovictions. Now even the minor proposed changes to the Act, which offered at least some relief to renters at risk of displacement, are delayed until the third phase of implementation in 2020.

Tenants facing displacement into a skyrocketing rental market cannot wait until 2020 to be offered basic protections against renovictions. People are losing their homes now and the government must act fast, by implementing vacancy control or at least by providing right of first refusal at the same rent following renovations.

Focus on "Education":
The provincial government has also set aside new funding for Landlord BC and the Tenants Resource and Advisory Centre (TRAC), for the purposes of improving education around evictions and other issues. Putting aside the absurdity of Landlord BC - a well-funded lobbying group representing for-profit landlords - receiving provincial funding for the “education” of its members, this focus on education reveals a misunderstanding of the real causes of renovictions.

Landlords do not renovict tenants because they misunderstand the Act. They do so because, in a runaway rental market with no vacancy controls, there is a clear incentive to remove affordable-paying tenants in favour of higher paying ones.

Far from not understanding the law, many landlords pay expensive lawyers and renoviction specialists to do this particularly dirty work. While the VTU welcomes the additional funding for TRAC, whose invaluable resources are made freely available to any who need them, further funding for profit-seeking landlords during a crisis for renters amounts to a perverse misuse of public funds.

Conclusion:
Overall, the government’s plans for the implementation of the Task Force recommendations show a lack of urgency on the crucial issues affecting the lives of tenants across the province. They show a deflection of the fundamental causes and effects of the rental crisis and a faulty belief that all stakeholders in this crisis have the same stakes on the line. Tenants know that the loss of a safe, secure, and affordable home has devastating impacts on every aspect of their lives. And yet, the provincial government feels their struggle is of equal importance to the gripes of powerful landlords, who fear above all else even the mildest cooling of their runaway profits.