Standing up to Serial Renovictors: VS Rentals

Earlier this year, VTU's Outreach and Advocacy Team (OAT) discovered that a company that was carrying out mass renovictions of entire apartment buildings across the Lower Mainland... 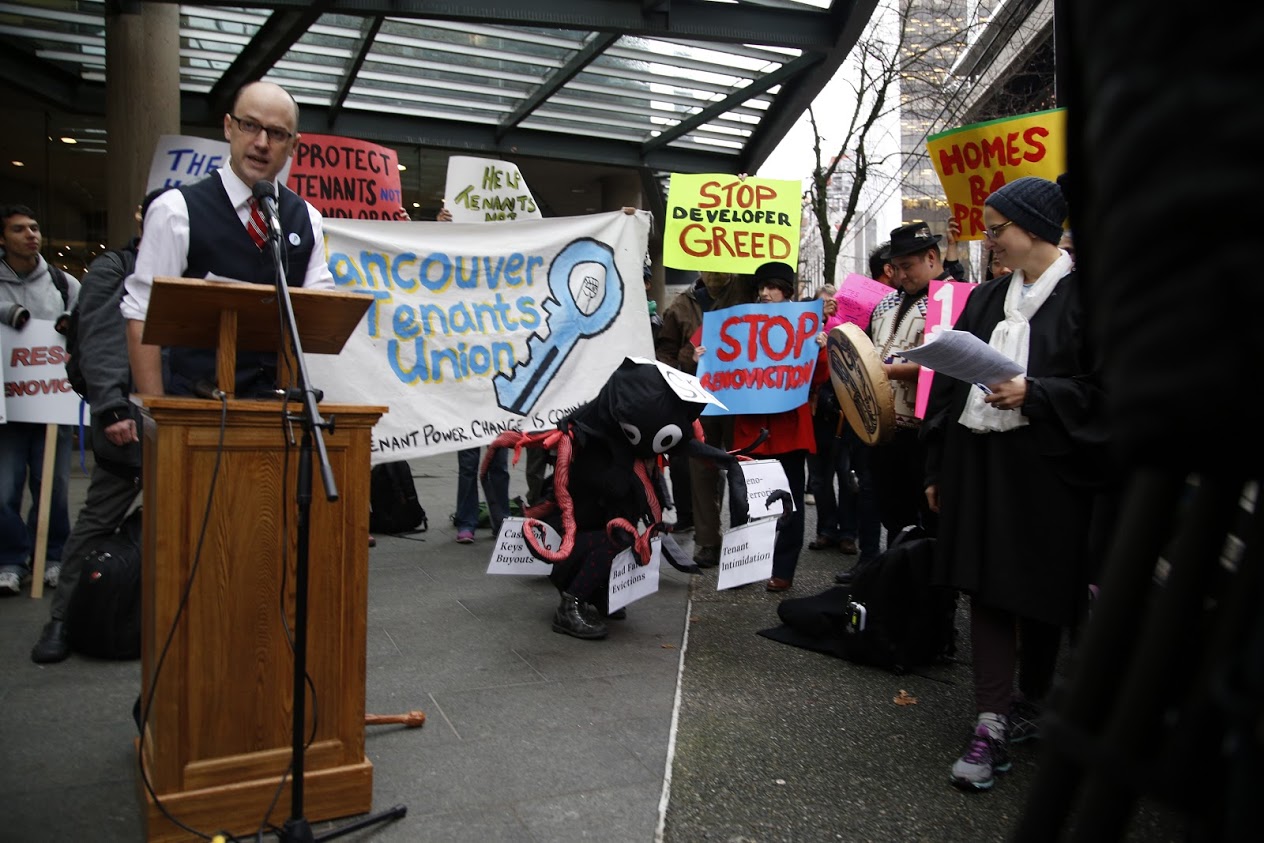 Why, and how are so many buildings in Metro Vancouver facing mass building-wide evictions?

Like all property values in the region the value of apartment buildings has skyrocketed in recent years. So have rents. As a respult, apartment building listings are packaged as investment opportunities for large financial and real estate interests. While real estate speculation may represent one aspect of a building's investment appeal, rental income is another major draw. Unfortunately, the tenants who currently live in these buildings are seen as an impediment, due to rent controls that are currently tied to the tenant. As a result, apartment building listings are marketed for their potential to be renovated and be rented out at a higher rate. In other words, mass renovictions are a key component of an apartment building's potential value.

Building owners often hire "specialists" who employ shady tactics to get tenants out of a building. These tactics include intimidation (such as warning tenants that renovictions are looming) and offering conditional buyout packages (which entices tenants to leave before getting a formal eviction notice). Many tenants in these cases, unaware of their rights, leave on their own accord. In this way, owners can empty out their buildings without issuing a single legal eviction notice or even receiving building permits.

Why are buyout packages bad for tenants?

In short, buyout packages do very little to offset the cost of moving and renting somewhere else in today's inflated market. Tenants who have lived in a suite for more than a few years may face rent increases as high as 100% should they have to move. In most cases, the dollar amount of a buyout package only offsets these costs for more than six months to a year. After that, tenants are on their own, which means seniors living on fixed incomes, families and workers trying to subsist on minimum wages simply not afford to stay in their communities.

Exposing Serial Renovictors
Mass-renovictions are a market-wide phenomenon that have been on the rise in recent years. However, this summer the VTU discovered several simultaneous renovictions that were being carried out by a company called VS Rentals. By speakng with tenants and doing some background research, organizers zeroed in on two companies companies operating out of the same office in downtown Vancouver, : VS Rentals and Coltric Properties. Coltric is a development company and the parent of VS rentals - the property management company that tenants actually dealt with.
OAT members began to connect with tenants facing renovictions in other buildings in various stages of renovictions. In some, we were too late and most tenants had already left. Others were just starting to receive buyout offers. Then, on Friday, November 9th, the VTU held a rally outside VS Rentals' offices in order to expose their practices. 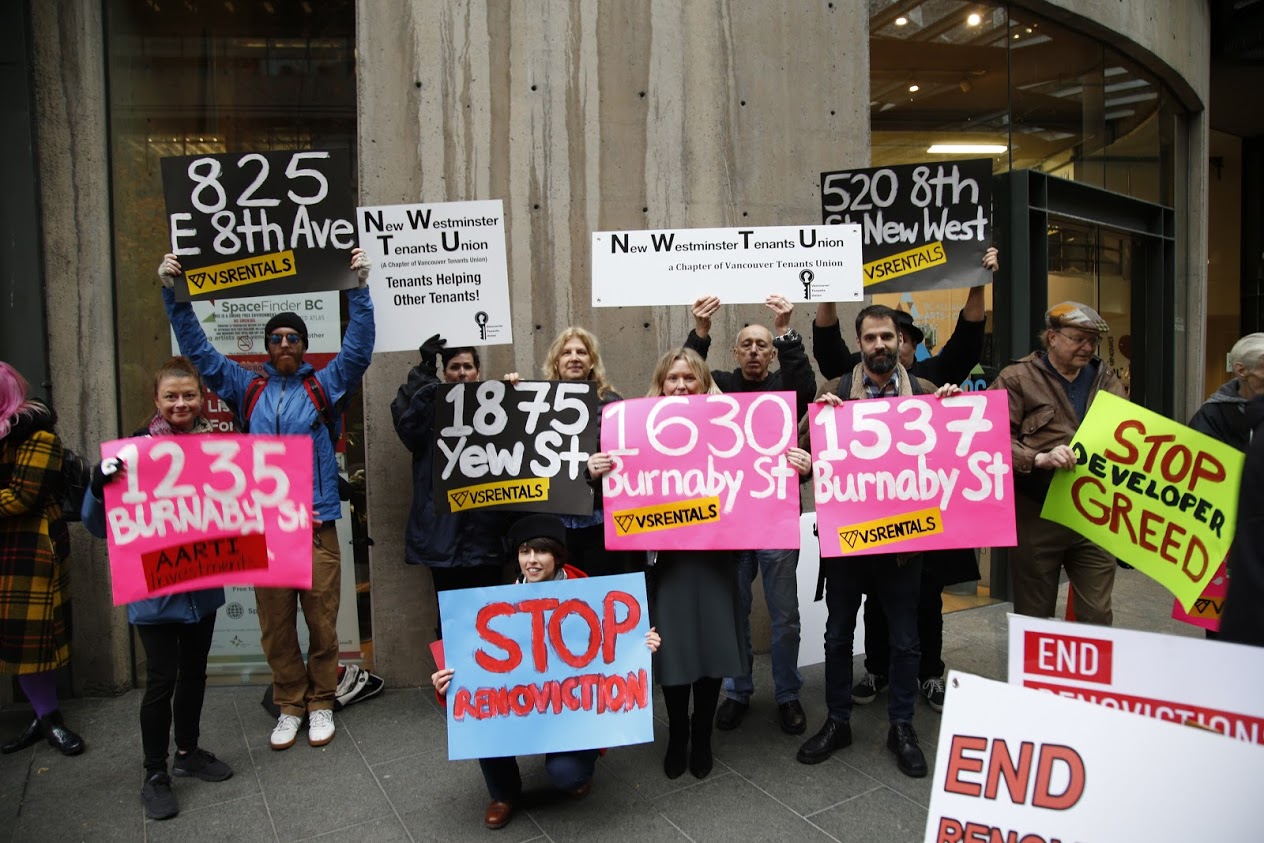 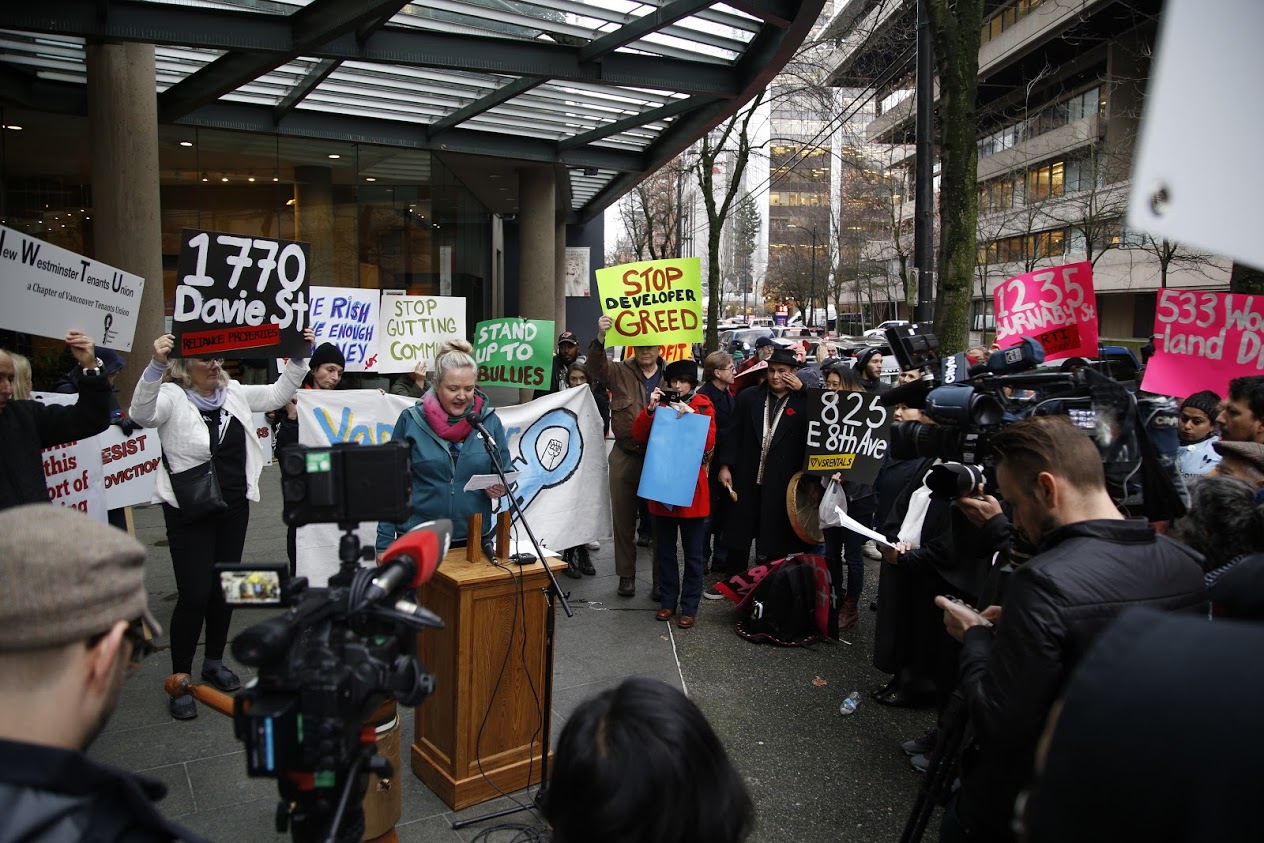 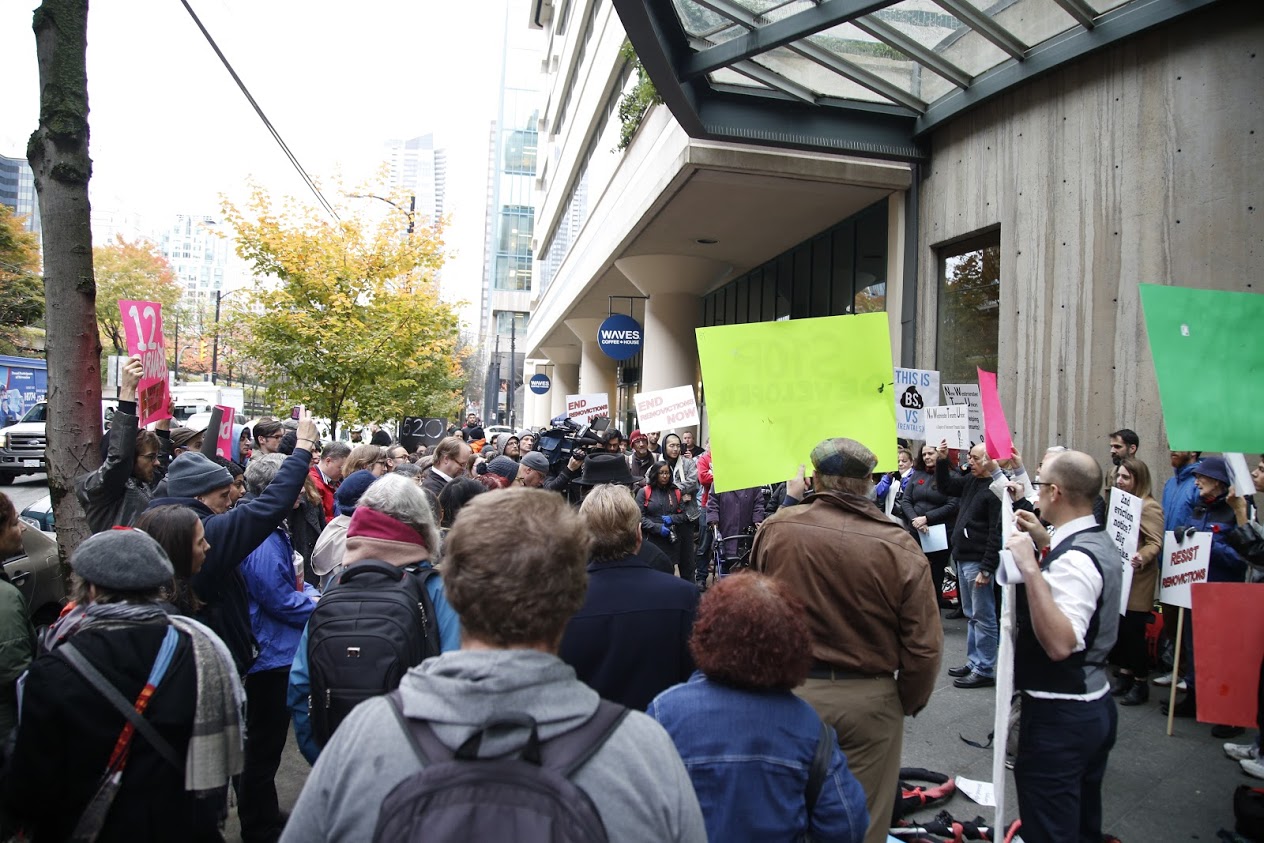 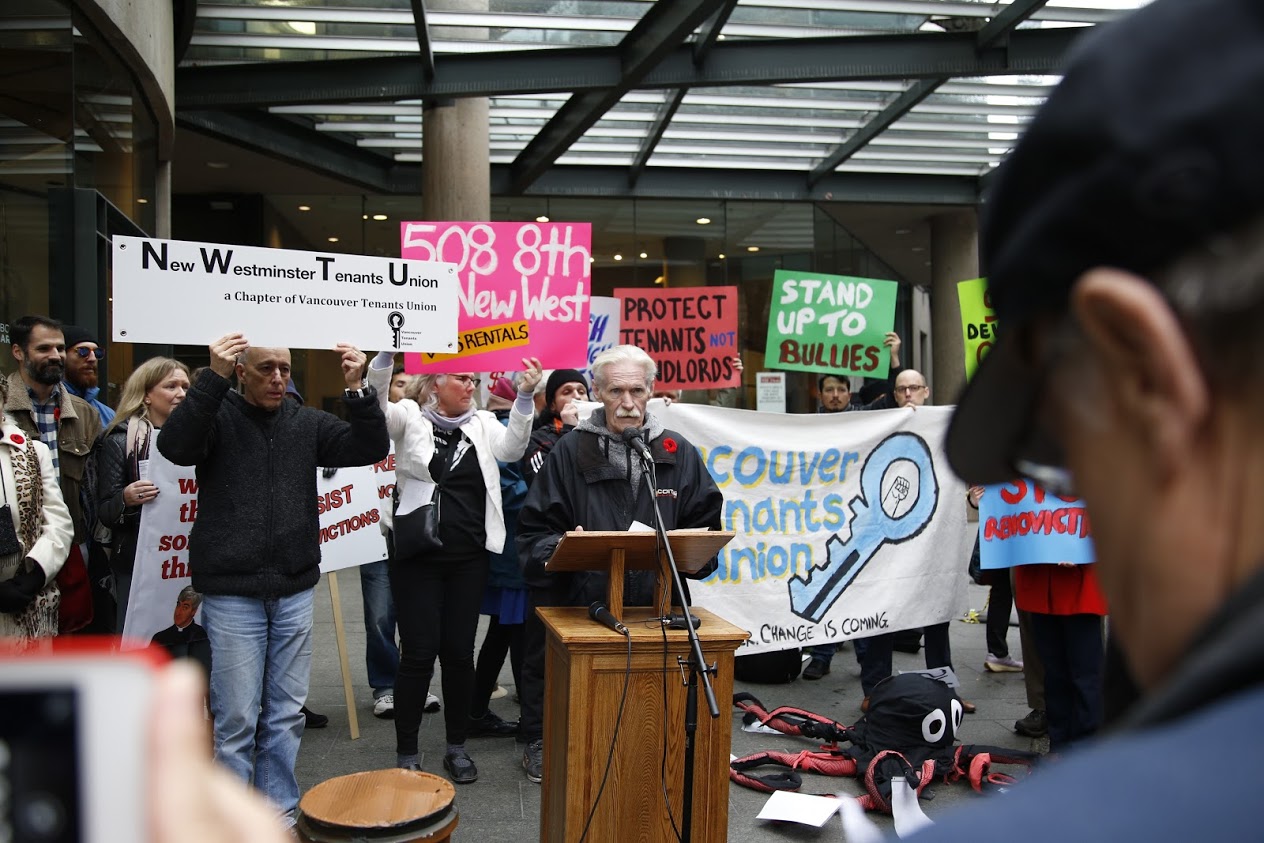 Photos by Nat Lowe
Who is VS Rentals?

Although we now know the names VS rentals' co-owners, exposing the company did little to hold them accountable. The day after the rally, VS Rentals and Coltric Properties quickly took down their websites. When media picked the story, the company pledged to reverse course on the renoviction tactics.

However, here's what the Vancouver Star Metro reported when they tried to contact the company:

After several media stories about the company’s tactics appeared... the company’s vice-president, Christopher Evans, told Postmedia the company would change its business model and would no longer require tenants to move out.

StarMetro attempted to speak to Evans, but a receptionist first said there was “no such person” at the company and then said Evans was not available

Whether or not VS Rentals follows through on their promise to stop the renovictions remains to be seen. Meanwhile, the VTU's exposure of the company's tactics became key evidence in Vancouver City Council's decision to begin cracking down on renovictions. 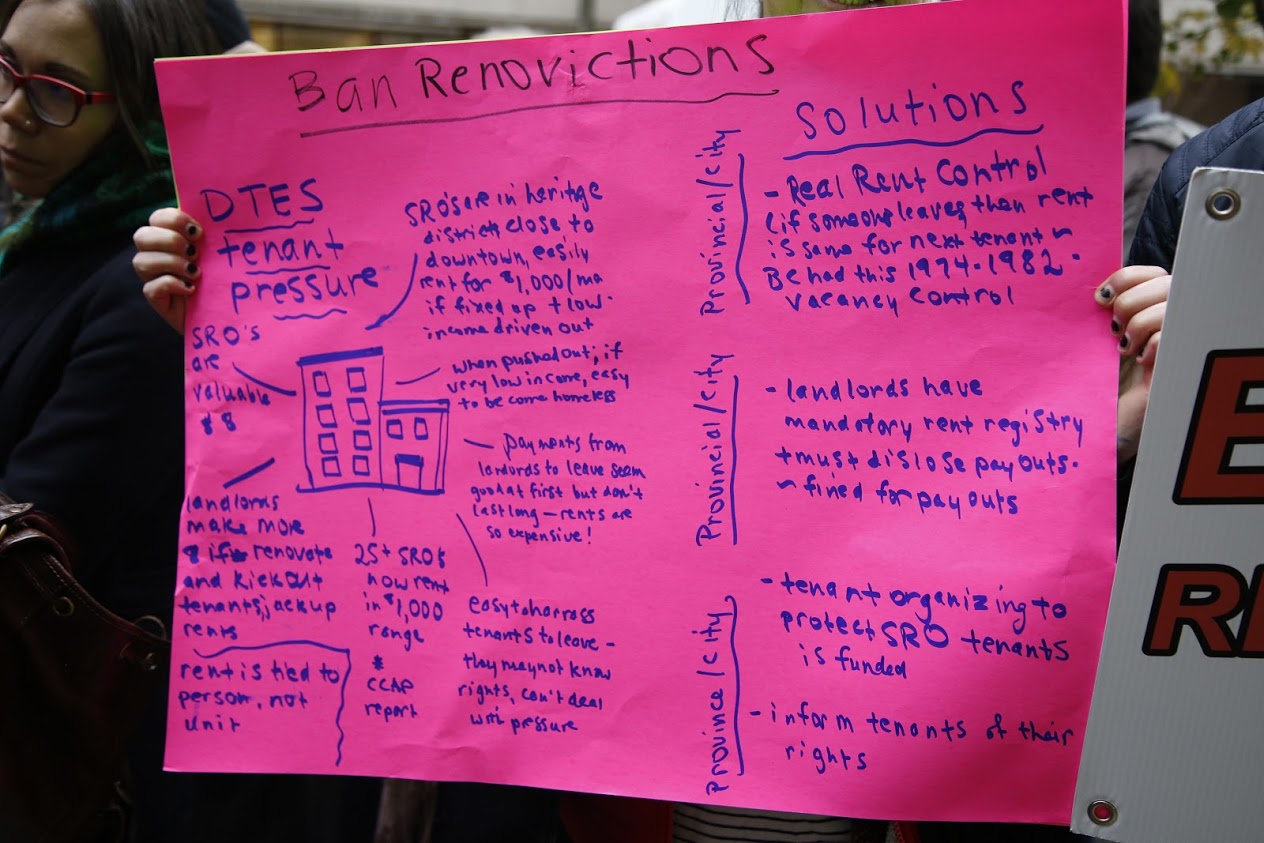 Tougher enforcement standards and proactive advocates can only do so much to stop renovictions. Based on our experience, VTU firmly believes that the best way to discourage this practice is to tie rent controls to units (vacancy control), thereby removing the economic incentive to evict tenants. Until that happens, companies will continue to employ tactics that circumvent the law, intimidate tenants who do not know their rights, and fuel the province-wide housing crisis by displacing vulnerable tenants as long as there's profit to be made.