Today the BC Rental Housing Task Force announced its recommendations after consulting with tenants province wide. The following groups are extremely concerned that vacancy control, the policy of limiting rent increases between tenancies, is not one of the recommendations put forward by the task force.

We urge the BC Government to implement vacancy control immediately despite today’s announcement. The first recommendation of the task force is to "Stop Renovictions"; as advocates have been emphasizing during the consultation period, the only way to really stop renovictions and increase tenant security is to remove the profit motive from evictions.

Acorn BC: "The majority of ACORN's members are low and moderate income renters. Vacancy control is a very important part of our affordable housing platform and many of our members have faced or are facing increased rents because of renovictions. ACORN is extremely disappointed that the BC Rental Housing Task force has decided not to recommend vacancy control. The Province needs to take a serious stand against unscrupulous landlords who use the lack of vacancy control to jack up rents by renovicting tenants. This plays a large role in intensifying BC's rental housing crisis. We are determined to fight to ensure that the Provincial government implement vacancy control despite the Rental Housing Task Force recommendation to maintain the status quo."
Murray Martin, Acting ACORN Chair for Burnaby

BC Poverty Reduction Coalition: “Rent control tied to the unit is a critical measure needed in an effective provincial poverty reduction plan. Without it, none of the other measures taken so far by the government or those anticipated next year will have a material impact on people’s lives because of skyrocketing rent increases between tenancies. People are losing their homes and their neighbourhoods without vacancy control. We urge the government to take this bold action now.”
Trish Garner

New Westminster Tenants Union: “We are seeing block after block of apartment buildings sold and emptied of their tenants as new landlords hike the rents up, almost double in many cases.  These are long-term tenants; the majority, seniors and pensioners. The whole character of this neighborhood is at risk.  We need to take the financial incentive away from companies whose business model is based on throwing people out of their homes. The recommendations today offer little substantive renoviction protection and will ensure that the burden of keeping people in their homes remains on tenants and volunteer advocates like ourselves. We are asking for government action befitting the scale of the housing crisis. We need vacancy control."
David Hendry

Pivot Legal Society: “The measures announced today do little to improve security of tenure for tenants. Without effective vacancy control, efforts to provide tenants with stability and to eliminate exploitative power imbalances between property owners and renters necessarily fall short. Tying allowable rental increases to the unit is a critical step to empower low and middle income tenants amidst their increasing marginalization.”
Caitlin Shane

Renters United Kelowna: “With regard to the question of tying rent increases to the unit, the Rental Housing Task Force has listened to landlords who have said they would cease developing needed rental units if this change was brought in.  It appears these landlords intend to continue boosting rents whenever there’s rental turnover, even when such turnover occurs more than once year.  This intention obviously contradicts public policy to limit rent increases to once a year.  Worse, some landlords will continue attempting illegal evictions so as to create the vacancies they want in order to apply rent increases.  This must stop.  Renters of British Columbia need vacancy control to bring fairness and security back to the rental market.  We need it now.”
Dianne Varga

Together Against Poverty Society: “Vacancy control is the most pressing policy need of our time. Eliminating the incentive to renovict and displace tenants would create housing stability for renters, especially elderly tenants, and effectively prevent further escalation of the housing affordability crisis.” Emily Rogers

Vancouver Tenants Union: “Vacancy control is a necessary prerequisite for any serious strategy to address the housing crisis. Without vacancy control, any investments made in public housing, financial supports for tenants, and new supply will not keep pace with the loss of affordable rental stock. Across BC average rents are rising two to three times higher than the allowed amount set by government every year, eroding the purchasing power of tenants, with affordable units being lost every month to renoviction and tenant turnover. Today’s recommendations not only leave out vacancy control, but offer no new substantive protections for tenants whatsoever. It is very disappointing to see the BCRHTF fundamentally misunderstand that the housing crisis is a crisis for tenants and not for landlords.”
Kell Gerlings

Victoria Tenant Action Group: “The unlimited increases between tenancies must be stopped. Not only do the price leaps strain residents financially, but the strong incentive to displace tenants creates constant upheaval in residents’ lives and communities.” Maureen Bourke 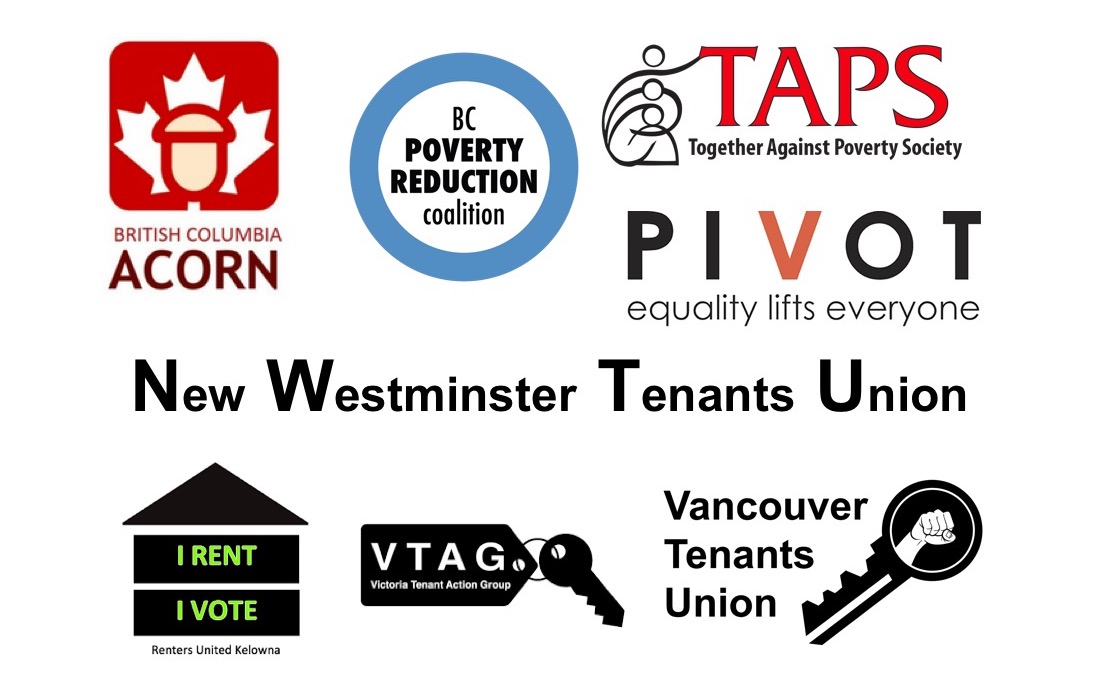