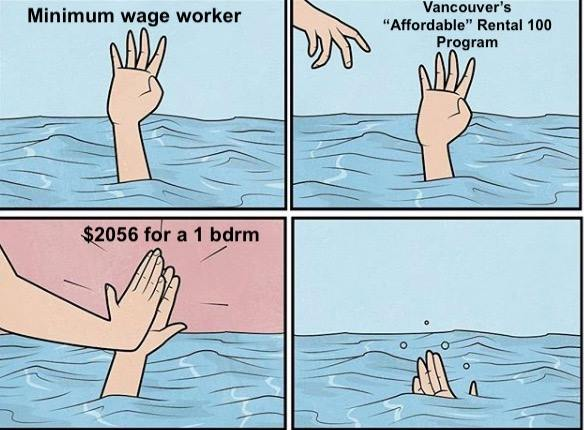 The motion calls on the City to look into mechanisms other than tax breaks - such as Rental Only Zoning - for incentivizing construction of rentals. In simple terms, this would mean less carrot and more stick for developers to build the housing we need. Additionally, the motion is directing council to stop incentivizing demovictions through its rental incentive program and to suspend new applications for its Rental 100 until the program is fixed in these ways.

Read the text of the motion: https://council.vancouver.ca/20190402/documents/motionb6.pdf

The City’s Rental 100 program which incentivizes creation of rental projects has been widely criticized in the last few months for its impacts on affordability and displacement, especially as the City’s definition of “affordable” rent keeps rising up to levels that the majority of renters cannot afford.

Only in the first 3 months of 2019, we saw three demovictions tied to Rental 100 projects. Read their stories on our blog:

Speaking on the motion will happen on Wednesday, April 3, between 3 and 10pm. Use this link to sign up.

Send us an email once you’ve signed up for an invitation to our speaking prep meeting: tenantsunion.yvr@gmail.com

If you can't attend the council session, use this page to write and ask the council to support Motion B6 on Wednesday and put an end to the practice of using public money to incentivize luxury rental construction and demovictions of low income tenants.

You can also write a direct email to Mayor and Council using these addresses: