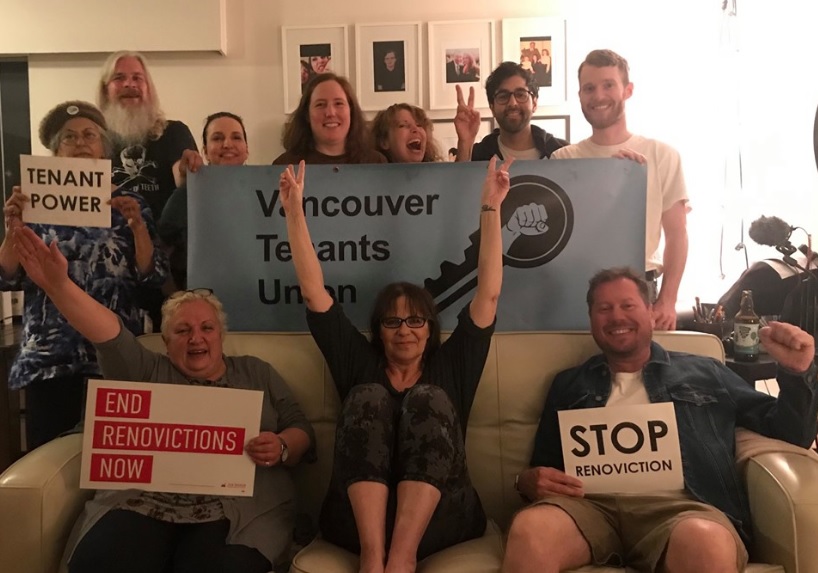 Five months after the disappointing Rental Housing Task Force report, the provincial government is still dragging its heels on action against renovictions and other tenant protections.

The lack of action has meant that cities and advocates alike are scrambling to stop displacement on a case-by-case basis.

However, part of the final ruling has caused doubt for tenants & advocates fighting renovictions. Judges reversed an earlier one that required Tenancy Branch arbitrators to consider tenants' offers to temporarily relocate when considering whether to uphold an eviction notice for renovations. This had previously meant tenants could move temporarily and come back at the same rent. The judge also said that landlords do not need to have all permits necessary to complete the project - only the ones that require tenants to move. This is a major step back, and we’ll now wait to see if Baumann’s landlord tries to evict her again. (Read more in the Vancouver Sun)

Later in May, 18 tenants in Mt. Pleasant stopped their renovicition, working with VTU advocates. The Tenancy Branch arbitrator found that the work to be performed by the landlord Q-14 Holdings Ltd. (aka developer Stanley Dee) did not require an end to any tenancy at the property because there was no need to perform all of the work at the same time, and the tenants were willing to relocate for the brief period of time that their units may need to be empty. A similar decision was reached at the for tenants in the 65-unit Bonnie Brae apartments in Port Coquitlam - a high profile case which sparked the city to tighten protections against Renovictions.

New Westminster, and Burnaby are also using local powers to try and limit renovictions. Measures like Rental-only zoning and fines for illegal evictions are stronger than what Vancouver’s city council has done so far. However, landlords are now suing the cities of PoCo and New West.

It’s hard to say if fighting renovictions at the RTB will be following the BC Court of Appeal's decision on Baumann’s case, but this doesn’t mean you shouldn’t fight.

If you’re facing a renoviction, or any indication that one might be coming, contact the VTU immediately:
vancouvertenantsunion.ca/contact