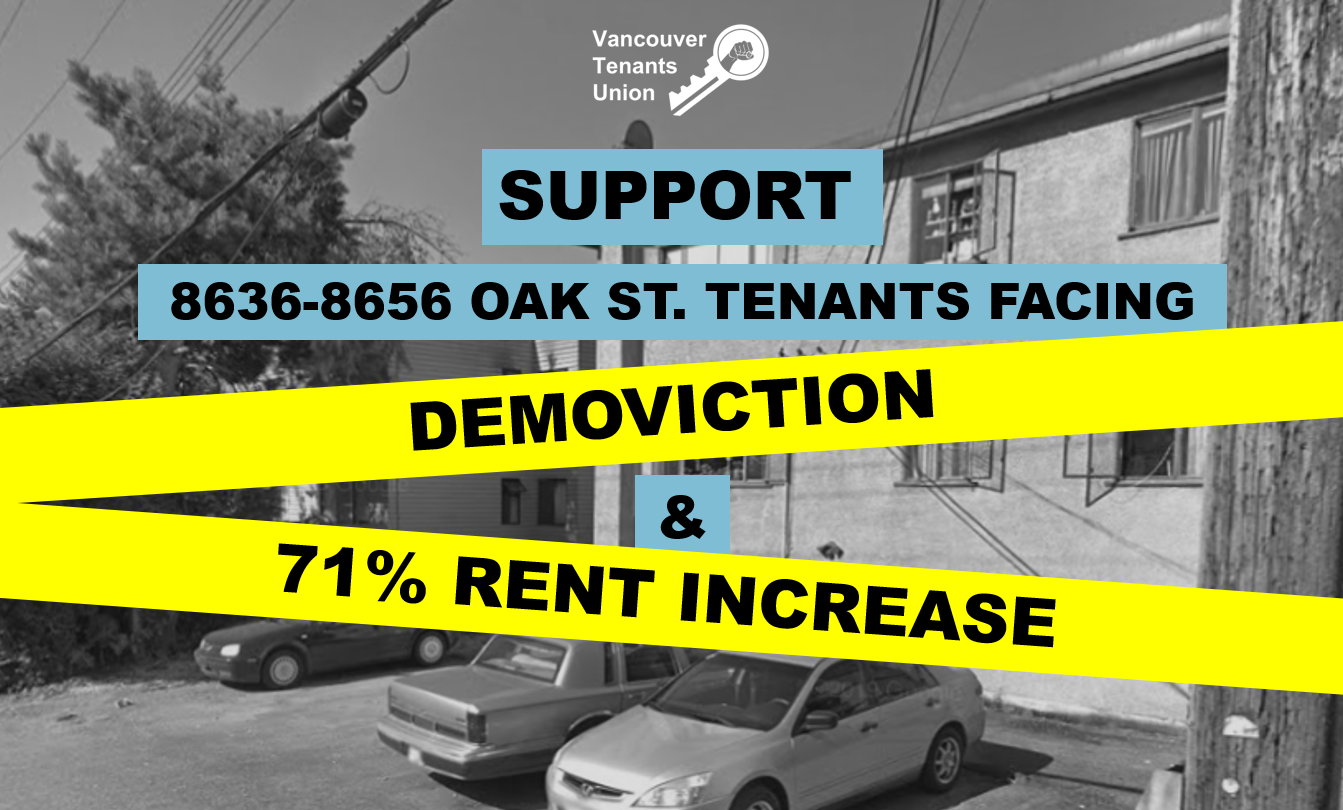 In the capital city of housing crisis, Vancouver, the developers have turned their unwanted gaze to the reasonably priced Marple neighbourhood - under the guise of solving the housing crisis by “increasing supply.” The owner proposed to tear down the 8656 and 8636 Oak street, replacing 45 rental units with two larger buildings containing 91 units, while bumping the rent for a one bedroom from $768 to $1875.

For the working class folks, returning to their homes would be impossible, so they organized with the help from VTU.

A community of evening shift, retail, and hospitality workers, and racialized members and newcomers, the tenants detailed the stories of their everyday life and turned them into formal emails to the councillors and inspiring speeches to their fellow VTU supporters and community members.

And of course, powerful testimonials inside the city hall gallery:

Sandra, one of the key tenants in the building, said in her statement to council: “I work at Superstore as a cashier. When they informed us about the rezoning I was deeply sad and anxious. It came to my mind, where can we stay with my family? Will we become homeless? So I started looking for a place, and I found out that the rentals are extremely high: for a one bedroom that is relatively small, the rate ranges from $ 1200 to $1500 or higher. What we’re paying now is only $730 a month. We belong to a low-income family, working at the rate of $14 an hour. Although we come from a low income family, we value hard work. We want to be productive citizens of this province. We arrived in Canada 5 years ago. All of us are just starting our life here in BC. We will be grateful if the building is not demolished.”

Tsering, a newcomer from Tibet who works as a care aide and companion, spoke about how many of the tenants in the building like her work multiple jobs to make ends meet. “Some people work two or three jobs to save to send money back home. I share a one bedroom with my cousin’s sister. Personally, I have moved ve times, and every time, I feel like this apartment feels like home, I want it to feel like home. But now, it’s like, where to go, and now what am I to do. The rent is too high, and this building doesn’t need to be rezoned, it is really liveable, and in the building, everyone is really friendly. So we are really hoping, please, please, to make our place livable and affordable.”

Bing, who works as a nanny, explained exactly how unaffordable even the “discounted” rents would be. “If the building will be knocked down, we will need to move to a smaller place. We wanted to go back in the new building because they said it was going to be affordable, but now that they’re saying it’s going to be more than $1300, I don’t think we will be able to afford it. I don’t have lots of money, only about $2000 a month. Our current rent is $720 a month, and when we looked in the neighbourhood, rents are $1100 a month to $1400 a month, and more. A rent increase is not affordable for us. Right now, we love to go home to the Philippines once in a while to see our families, and losing this building means we will lose that as well. The city should build more affordable housing. The rent increase will drive us out. So we are asking the city to reject the rezoning application, and leave the building alone.”

Of course, there were also a handful of pro-demolition speakers. All of them praised the developer for “increasing supply,” seemingly oblivious to the moving speeches from the actual tenants. One of these speakers, when pressed by council to divulge whether he had some connection to the developer, had to admit that not only did he not live in the Marpole area but that he resided in the suburb of Port Moody—almost an hour’s drive away.

“How can anyone listen to these stories and then vote to destroy their homes?” a supporter in the gallery remarked. It turns out 5 out of 9 councillors could. The human cost of this development and the tenants in the gallery might as well be invisible to them

Much was made by staff and the developer of the fact that the development met the guidelines of the Tenant Relocation Protection Policy (TRPP), which would assure that low income tenants would be guaranteed new accommodations costing only 30% of income. But no such affordable rentals exist in Vancouver, with a 0.5% vacancy rate and a several-year waitlist for social housing.

The tenants are organizing to stop the permits for demolition of their buildings from being issued. This battle, and the larger struggle against demovictions in Vancouver, is not yet over.