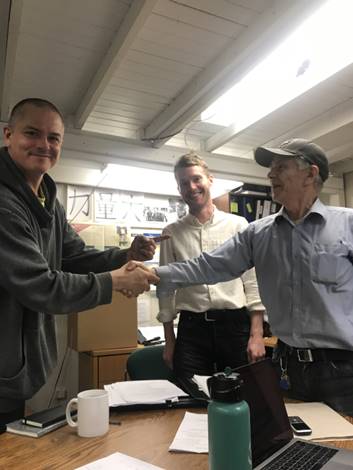 The VTU has its first victory!

A tenant at Ross House, an SRO Hotel at 313 Alexander Street, was given a fabricated Two Month Notice claiming to need his unit as a caretaker suite.  The tenant - a senior - has lived in his unit for over ten years and lives on a basic Canada Pension Plan. The building has been subject to media attention for its use of fixed-term tenancies to evict low-income tenants and turn over rooms for higher rent. The proposed “caretaker” was a long-time business associate of the landlord, apparently willing to conclude his management career by moving into a <100/sq SRO room and acting as caretaker in exchange for a rent abatement. Pressed by the arbitrator in mediation prior to the full hearing, the landlord admitted they didn’t have a case and rescinded the Notice. The tenant was able to continue his tenancy at $450/mo and the landlord has been barred from claiming the unit as a caretaker suite in the future. Way to go to VTU advocates Liam, Wendy, and to the tenant for pushing back!

Next step: to advertise this victory to other tenants at Ross House.  If one tenant can do it, then other tenants can see that it’s possible to fight back and win too!