326 Nanaimo: What We Learned 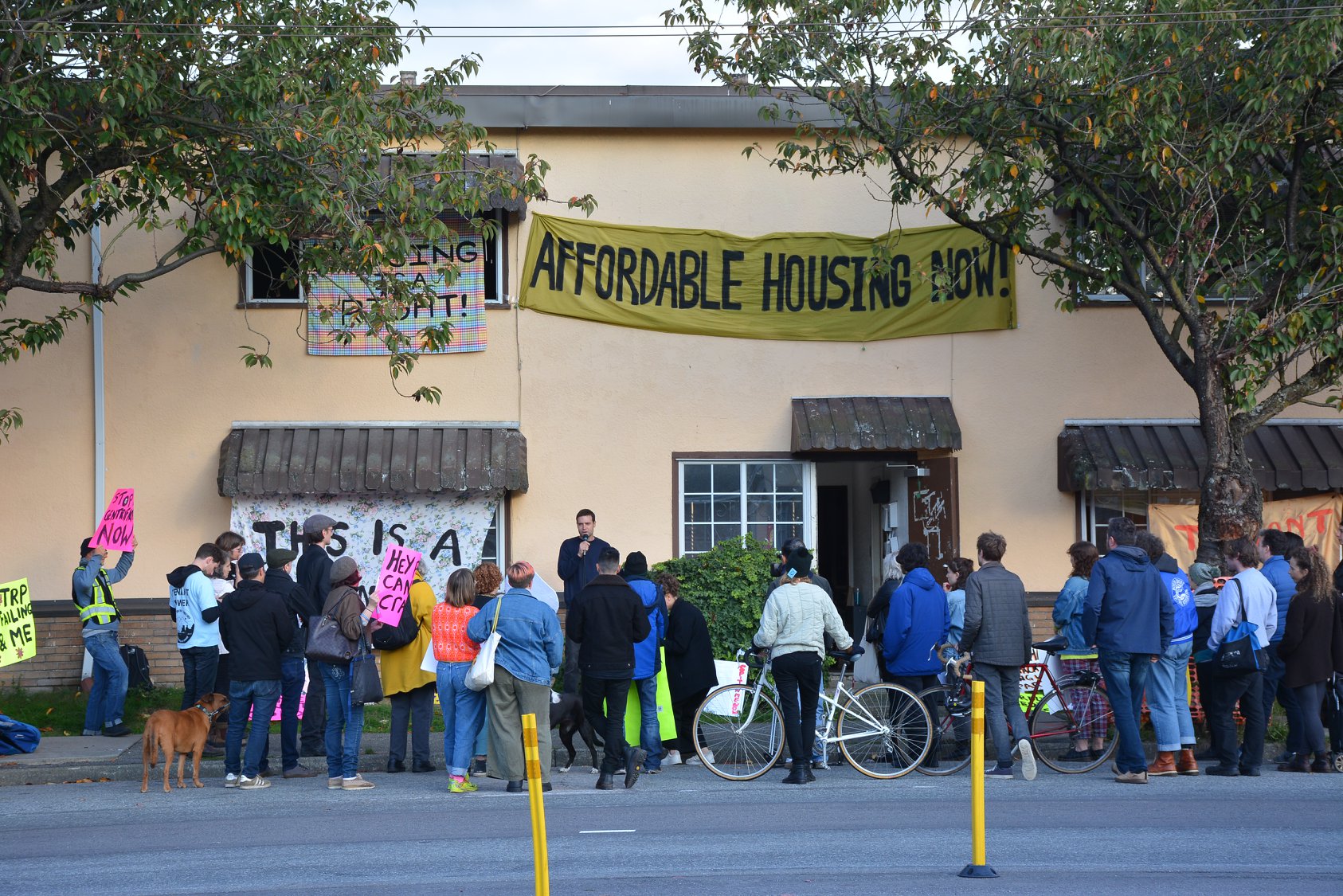 Eight demovicted tenants at 326 Nanaimo St. fought to get the relocation they were promised by the City of Vancouver, with the organizing help of VTU, and support of the broader community.

In December of 2018, all tenants in the apartment building at 326 Nanaimo were evicted by their landlord.

A City-approved memo to tenants in January 2019, promised them that developers would provide three relocation options of similar size and within 10% of current rent (which was $1100 for 2-bedrooms) with at least one option being in the same neighborhood. These options are required by the city's Tenant Relocation & Protection Policy (TRP), which sounded good, at least on paper.

The developer, Lanaca Properties, owned by Lisa Chan - who also owns two short term rental companies by the names of Suite Living and Sterling Furnished Suites - purchased this building in 2017, in order to demolish it and build condos.

The tenants heard nothing regarding relocation from Lanaca Properties until less than a month before their eviction date of Sep 7, 2019. Chan hired a PR company - Reside Community Relations, an affiliate of Talk Shop Media - to act as relocation specialists. The tenants were outraged. Surely a developer with access to short term rental suites could relocate tenants? And why a PR strategy?

In the month before the eviction, the “specialists” sent Craigslist ads to the remaining tenants. None of the ads met the requirements of the City's tenant relocation policy.

The tenants had emphasized several times to their landlord that the most important issue for them is relocation so that they could afford to stay in their community. Working with the VTU, they mobilized the neighbourhood in support by starting a petition and letter-writing campaign to City Council. The community pressure helped the tenants get their eviction date pushed back to Thanksgiving (mid-October).

Meanwhile, Lanaca Properties stonewalled tenants' attempts to bargain for a better deal, and repeatedly threatened to have them removed with a court-ordered bailiff. This caused three of the more vulnerable tenants to leave without a deal: A very low income couple with a large dog moved into a 1-bedroom for $1750/mo - a rent that they can't afford - because it allowed them to stay in the neighbourhood. A low-income Indigenous woman had to separate from her roommate and look for solo housing in the neighbourhood. Her new rent is 50% more. 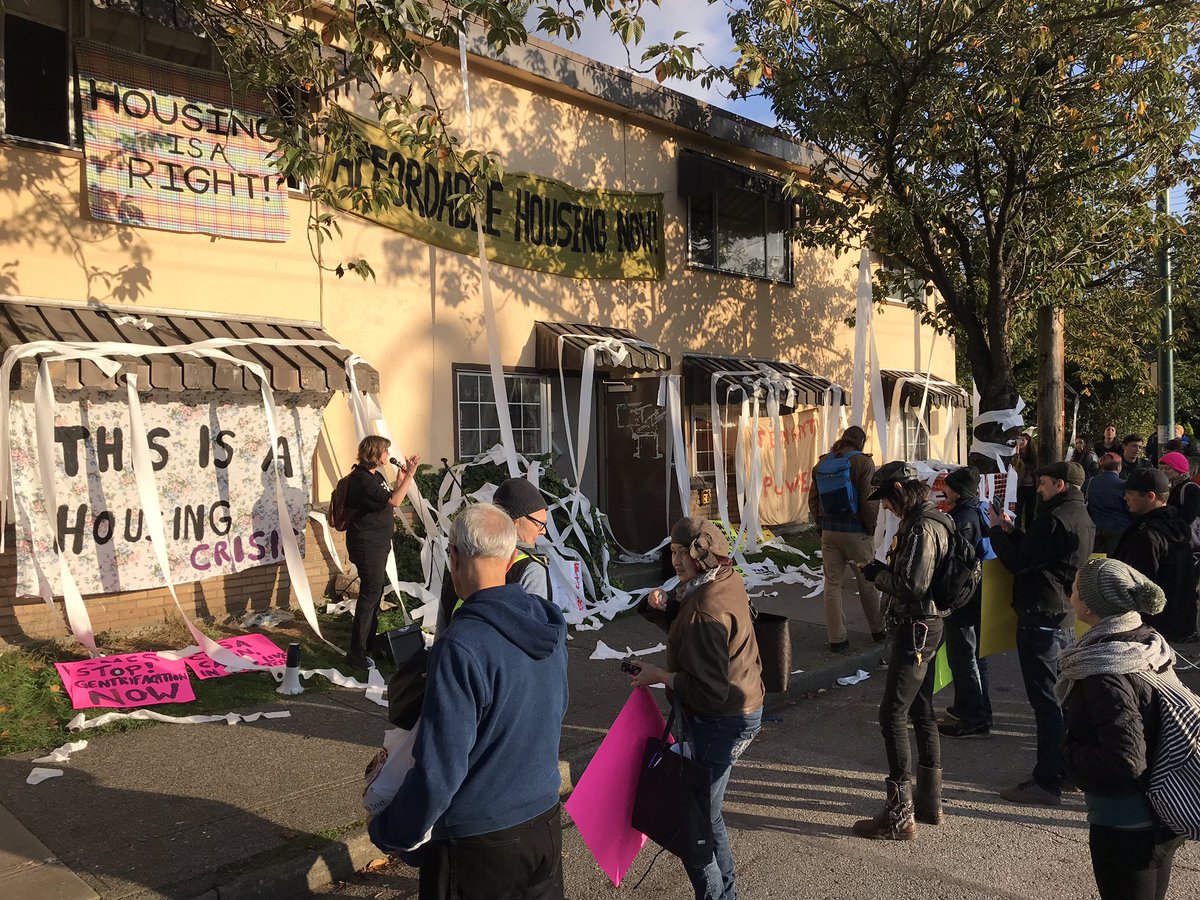 Photo: Rally at 326 Nanaimo - supporters threw toilet paper to symbolize that the TRP without the "R" was just TP

The other tenants, outraged, held a rally at the building with VTU. Supporters from the neighbourhood called on the City to stop the eviction until the conditions of the tenant relocation plan were met. This pressure forced Lanaca to push back the eviction date by another three weeks.

Soon after the rally, the building was broken into. Tenants lost over $2000 worth of personal possessions. Despite numerous requests after the break-in, Lanaca refused to fix a broken door and secure the building. Instead, they blocked a fire exit. This further exposed tenants to the possibility of forced eviction, as the Fire Department took notice and was concerned about the state of the building. VTU members and neighbours continued to send letters to the city calling for justice. 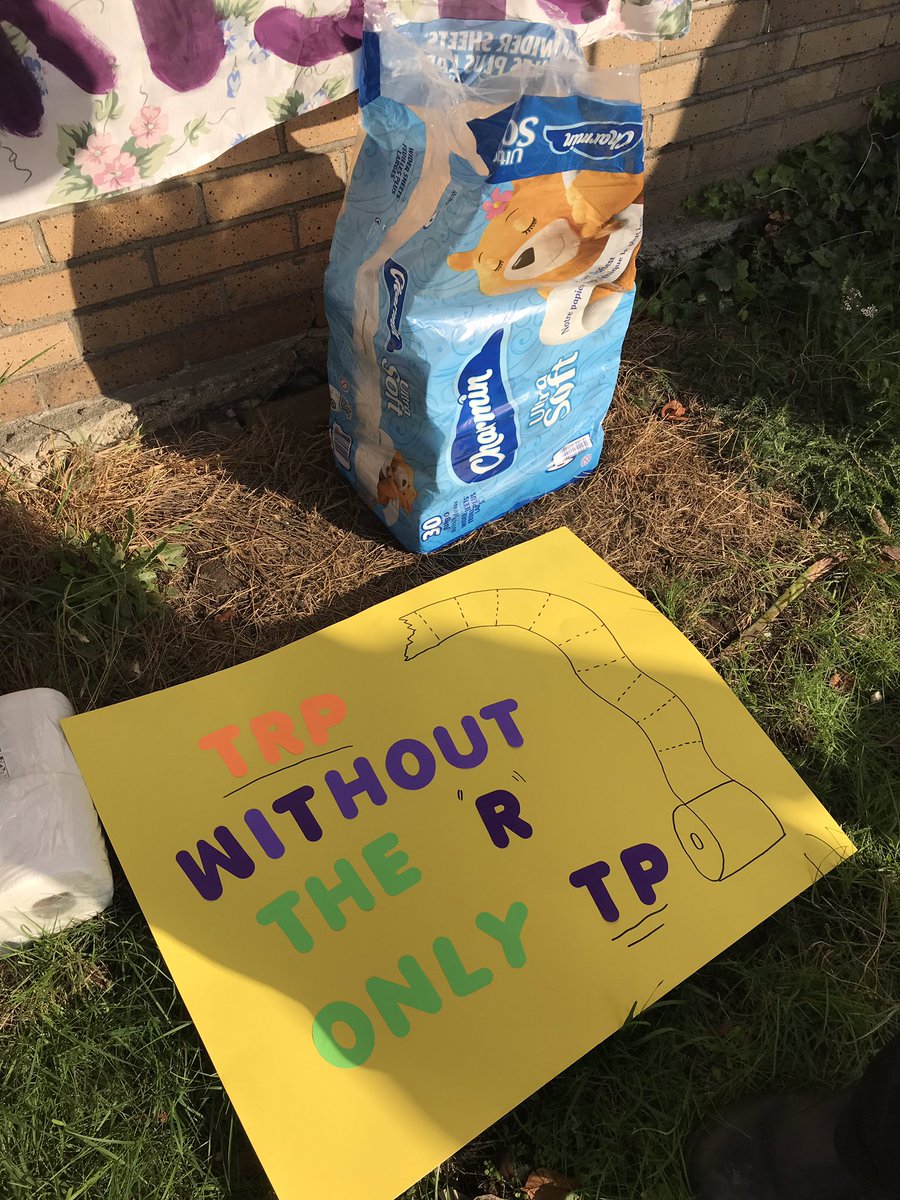 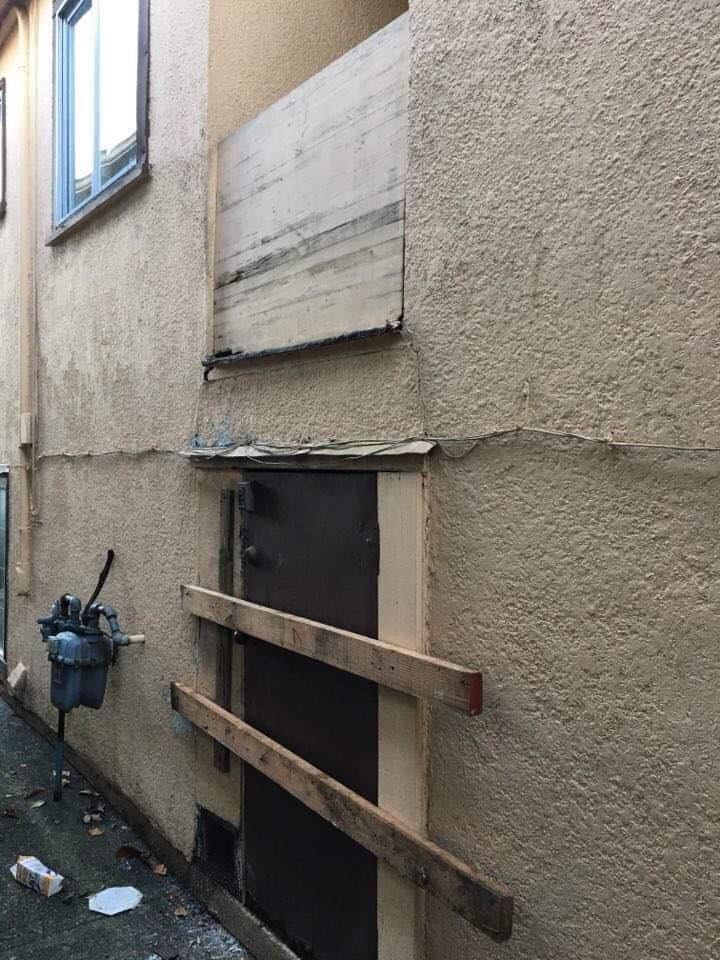 Photos: Sign from the TRP rally (left), Two piece of wood blocking a fire exit, attached from the outside (right)

Finally, the day before eviction, the Lisa Chan finally agreed to meet the remaining tenants and city staff to negotiate a settlement.

City staff told the tenants that their relocation had to be done on terms that were fair to the developer. This left tenants with the impression that City staff were making subjective interpretation of policy with no oversight or ability to appeal. They also felt they were given no genuine help finding new homes by Lanaca, not to mention the immense stress, and the real threat of forced removal.

At this point, the tenants gave up up on their hopes that the relocation policy would be honoured, and instead tried to negotiate extra compensation. The tenants asked for rent top-ups for 12 months, (i.e. the difference between their current rents and what a likely future lease in the neighbourhood will cost them), so they could afford to stay in the neighbourhood.

Rent top-ups are part of a package of rent stabilization policies recently adopted in the City of Burnaby , with support from landlords and developers. The policy gives demovicted tenants the right to return to the renovated or new units at the same rent as before, with the developer paying the extra rent incurred by the displacement in the meantime. By placing the burden of relocation cost on the developer, tenants have security. Rent-top ups are not part of Vancouver's relocation policy, but the tenants at 326 Nanaimo won it through bargaining.

The negotiations resulted in another postponement of the eviction until the end of November, but several tenants opted to take a buy-out and leave, due to the dangerous condition of the building. Through bargaining, they managed to receive an offer that would top up their rent for the first 18 months after moving.

By the last week of November, with only one tenant remained. City staff told the tenant that they were ready to sign off on the relocation policy, because Lanaca had "sent more than 25 listings", even though none of them fulfilled the policy requirements. The only other time the city contacted the tenant was a call to ask if they “had a couch to crash on”, in case the Fire Department enforced an immediate evacuation.

A final meeting with the city and Lisa Chan came came after intense pressure by the VTU, the community, and a few City Councillors. Hours before their eviction, the remaining tenant finally received a settlement from Lacana that provided 8 months rent top-up.

The first three tenants who left never got a deal, and City staff said the developer had no responsibility to them, despite the overwhelming evidence that they moved out under duress.

VTU organizers learned a lot through the experience at 326 Nanaimo St.

1. If you are facing demoviction in Vancouver, don't leave - bargain.

The tenants at 326 Nanaimo who left before even getting a buyout offer got nothing. The tenants who stayed did not get what they were entitled to, but they did get a better deal than what they were initially offered. The city's weak enforcement on the relocation policy means creates a situation where tenants must organize and demand a deal from their landlord.

If you are in a similar situation and need a union by your side at the bargaining table, contact the VTU immediately.

We learned that Vancouver's current tenant relocation policy does not properly define its expectations from developers. The policy should be enforced by the city in a way that mitigates the upheaval of forced displacement as much as possible. Instead, City staff allow developers to check the boxes so that both parties can wash their hands of the tenants' well-being, and offer a paltry sum that will be lost to another landlord within a few months.

We have learned too, that there is another way. The City of Burnaby is using their new Tenant Relocation Policy as an opportunity to get more for tenants. If developers can get on board with providing what tenants need in Burnaby, why can’t the City of Vancouver ask them to do the same here?

Sign the Vancouver Tenants Union’s petition to Fix Vancouver's tenant protections and bring them in line with Burnaby’s: https://www.vancouvertenantsunion.ca/protections

Three years after the demoviction, Lanaca's Properties completed the new building on this site. Rent for a 2 bedroom in the new development was listed at a staggering $3650 per month. Even if the tenants had claimed their right of first refusal (which, under the TRPP offers a discount of 20% off of starting rents), the tenants would still face a 265% rent increase over their previous rent of $1100 for a 2 bedroom. Years of inaction to fix the TRPP means many more stories like this have continued to play out across the city. The lessons above remain true - tenants must organize and bargain for better, and ultimately we must continue to push for city-wide changes to the TRPP. 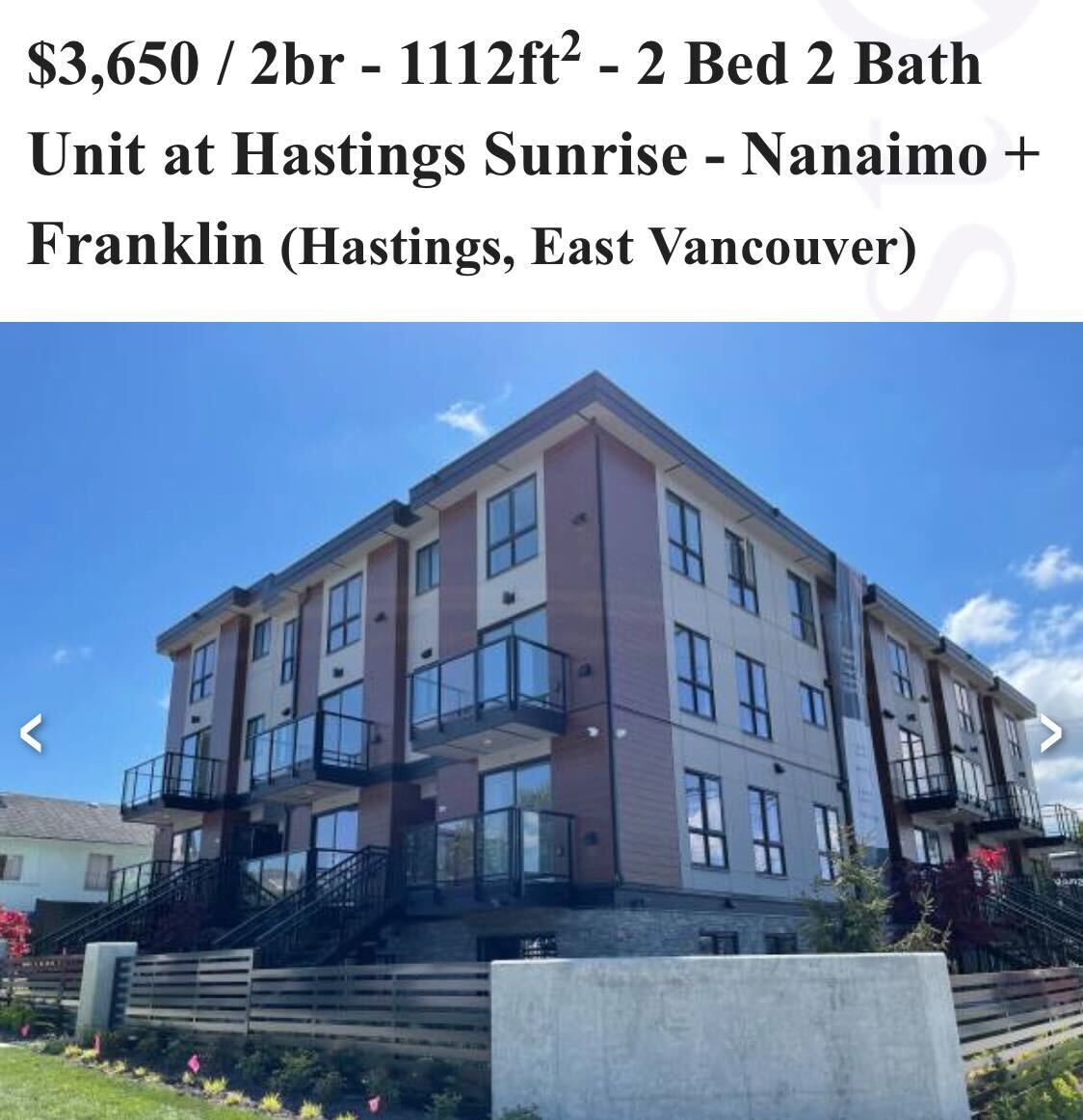