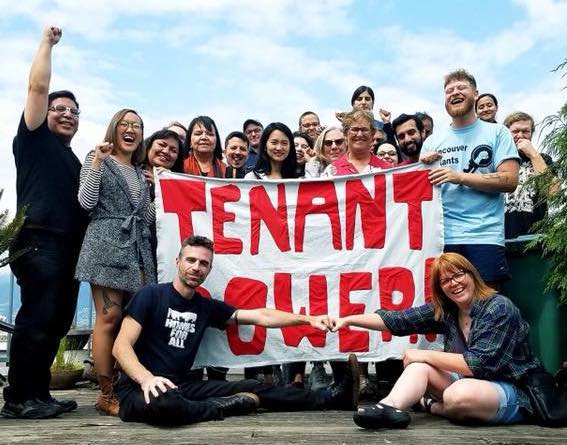 The VTU is poised to take back the city from landlords and developers in the upcoming municipal election...

(Unceded Coast Salish Territories) The Vancouver Tenant’s Union (VTU) is excited to announce that the union is organizing a Renters Report Card Campaign in the lead up to the October 20, 2018 Municipal Election.

On August 2-4, 2018, twenty new VTU organizers attended a two-day training with the Dolores Huerta Foundation (DHF) to learn how to be disciplined and systematic about building a long-term base of tenant power. With DHS’s help, we designed our first base-building project, a report card project designed to identify “pro-renter candidates” and mobilize 2% of the voters needed to elect them.

According to David Hendry, one of the lead organizers working on the Renters Report Card Campaign: “governments cater to landlords and developers who have organizations to represent them.  Tenants are 53% of Vancouver’s population and we need to build a base and a union to build our own political power.”

A questionnaire for mayor and council candidates will be released on September 9. The Vancouver Tenants Union will be hosting a one-day training session with Tenant Teams in 25 apartment buildings on September 15th to grade municipal candidate’s report cards and train teams to “Get out the Vote” in their buildings.

“We are standing on the shoulders of giants,” said Rocco Trigueros, one of the trainees.  “Meeting Emilio Huerta, Dolores’s son, and Cruz Phillips, Board Member and Trainer for the Dolores Huerta Foundation and learning about their history and lessons as organizers in the Farm Worker Movement, having it tailored to our experience as tenants, was an incredible privilege. There is such a strong legacy of this kind of work in the USA. There are decades and decades of mass organizing. We are learning from mentors that have been in that struggle for social justice for a very long time. This training will not only take us to where tenants need to be for this election but help us grow as we take on new projects in the future.”

The VTU believes everyone has a right to safe, affordable housing. Recently they celebrated their one-year milestone with over 1,000 members and several success stories attributable to their dedication and hard work.