Are landlords really the ones hurting in the housing crisis?

“We are acutely aware of local incomes and the pressures that everybody’s facing here … but the harsh reality is, our expenses are increasing too,”

As the developer community braces for the BC Rental Housing Task Force’s report in the next few weeks, lobby groups like Landlord BC and the Urban Development Institute want to convince the public and policy makers that if changes to the Residential Tenancy Act affect their bottom line, tenants will suffer. According to them, the housing affordability crisis has adversely affected developers and landlords too, and policies like vacancy controls - tying rents to the unit  - will hurt their ability to build and maintain private rental housing. 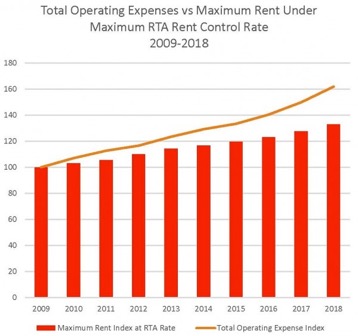 To explain their graph, Landlord BC uses a hypothetical example property: a mid-size, three-story, 1970’s era rental building in Metro Vancouver that has been “well maintained” over the decades by “long-term owner managers”.  The example states that each unit is rented for $1000 per month, starting in 2009, and that since then overall operating costs have increased by an average of 7.6% per year.

Omitted from the example is the amount units the building contains, so I will estimate that there are 30 units - that’s 10 per floor.  That would generate $30,000 of rental income per month, or $360,000 in the first year (or, almost $1000 per day). Taking the rental income into consideration, it becomes apparent that Landlord BC’s graph is misleading, because it sets maintenance costs at the same baseline cost as rents. While operating costs vary from building to building, a far more realistic formula, cited by many property management advisors*, is “the 50% rule” - which states that operating costs should be roughly 50% of the rents charged.

Taking this principle into account, I created a revised graph for Landlord BC’s example: 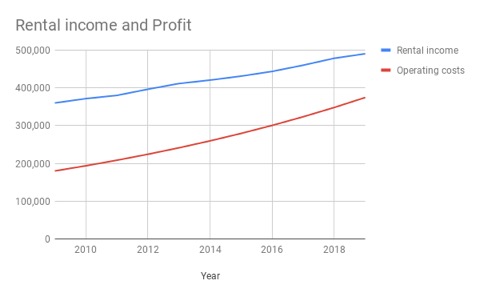 Imagine how much this “well-maintained” Metro-Vancouver property’s value must have increased over the last decade. After all, the real investment value for the building’s owner comes in the form of rising property values over the long-term. And, if a landlord really is operating at a deficit, BC’s Residential Tenancy Regulation (Section 23.1) allows them to apply for extraordinary rent increases, so they can return to profitability. Can you think of any other type of business that is protected from running a deficit through legislation?

Landlord BC’s own figures suggest that the housing affordability crisis actually hasn’t been particularly hard for them. By contrast, 1 in 5 tenants in this province currently spends 50% or more of their income on rent. In the City of Vancouver’s 2018 homeless count, a staggering 78% of people surveyed had lived there before they became homeless - most were likely renters. Tent cities have sprung up in almost every corner of the province, and rising rents have caused those living on welfare to have to choose between homelessness or starvation. While rising rents have been a significant driver of the housing crisis, Landlord BC favours government rent supplement programs. This is not surprising, since the funding goes directly back to landlords in the form of higher rents.

Despite the circumstances, the developer lobbyists are also firmly against vacancy control, insisting that price controls will hurt the private market’s ability to build housing. That logic doesn’t hold up well when you consider that cities like Vancouver actually already have an adequate supply of housing - developers just don’t build not the affordable kind. In a study of Vancouver’s private rental market, with and without rent control in the 1980s, Celia Lazzarin noted that the removal of BC’s vacancy control laws in 1984 did not lead to an increase in private rental stock. She concluded: “The Private rental market does not, and cannot, respond to social need,” This is because private rental housing exists to make profits for developers and landlords first, and provide the social need part second.

Developers have also destroyed thousands of affordable private rentals by way of demovictions and renovictions in the BC over the last decade. As tenant organizers have discovered, this staggering level of displacement is not caused by individual private landlords trying to upgrade their aging investments, but actually by large real-estate investment firms buying up multiple buildings, evicting tenants, renovating, and jacking up rents as a vehicle to maximize investor returns. Urban Development Institute chair Jon Stovell’s is currently poised to renovict 60 Vancouver tenants, through his company Reliance Properties Ltd.

Increasing the supply of real affordable housing means focusing on non-market options - such as social and co-op housing, which helps to de-commodify what is supposed to be a human right. The province also needs to tie rent controls to units to preserve affordable stock and protect renters from renovictions. The developer and landlord lobby will use their significant wealth and power to steer policy makers towards solutions that benefit them - tenants and others who have faced the worst of the housing crisis must push back against false narratives.