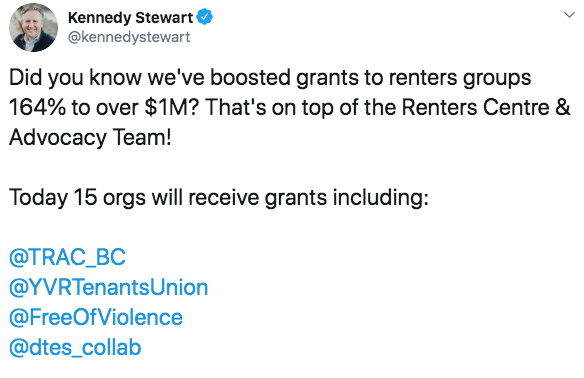 On February 26, Vancouver City Council approved our union's application for the Renters Services Grant. VTU membership will have opportunity to vote on whether our union accepts the grant at our Annual General Meeting on March 22nd.

The one year amount of $40,000 to the VTU is one of fifteen grants approved by Council.

Members who attended the September 2019 General Meeting spent much of that meeting debating whether or not the VTU should apply for the grant. Ultimately, members voted unanimously in favour, and nominated an ad-hoc advisory committee consisting of 6 members to consult with the Steering Committee during application process.

Read more details on how the Renters Services Grant recipients were selected and the conditions of the VTU's grant HERE.

Members will be given a detailed report at the March 22nd AGM prior to a vote on whether or not to accept the grant.