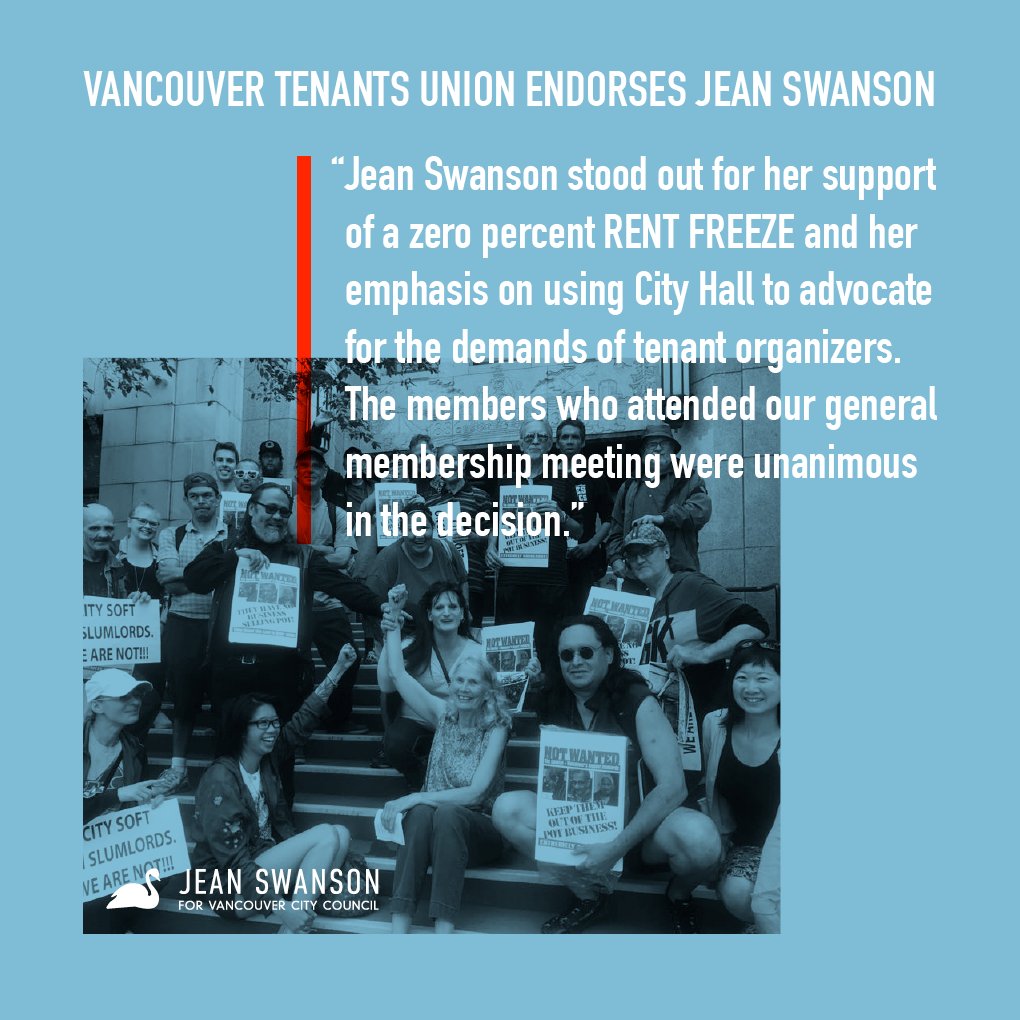 On Saturday, Sept. 16, approximately 50 members at the VTU General Meeting voted unanimously for the union to endorse Jean Swanson's candidacy for the 2017 Vancouver municipal by-election, on Oct. 14th.

VANCOUVER -- On Saturday, at a general membership meeting, members of the Vancouver Tenants Union voted unanimously to endorse Jean Swanson in the upcoming city council by-election to be held October 14. The decision was reached based on responses to a VTU questionnaire that was completed by four of the candidates in the by-election.

“Renters’ issues are finally getting the attention they deserve in Vancouver, and we were very encouraged by the questionnaire responses,” said Mark Iyengar, VTU steering committee member. “Renters make up half the residents of Vancouver, but for too many years our plight has been off the political radar -- that’s changed now.”

“Among the detailed and considered responses we received, Jean Swanson stood out for her support of a zero percent ‘Rent Freeze’ and her emphasis on using City Hall to advocate for the demands of tenant organizers. The members who attended our general membership meeting were unanimous in the decision.”

The Vancouver Tenants Union was heartened by most of the candidates’ responses, and notes in particular the detailed and serious policy proposals that Pete Fry of the Green Party and Judy Graves of OneCity submitted.

All of the four respondents, including Diego Cardona of Vision Vancouver, supported key changes to the Residential Tenancy Act, such as ending fixed-term leases, that are needed to provide tenants with greater protection against renoviction and other landlord abuses. Cardona, however, did not criticize the City government’s approach in any substantial way. Hector Bremner of the NPA did not respond in time for our general meeting.

The Vancouver Tenants Union, founded on April 29th of this year, is made up of over 700 general members, tenant organizers, and building representatives. Candidate questionnaires can be read HERE.