How We Won at Broadway-Carolina 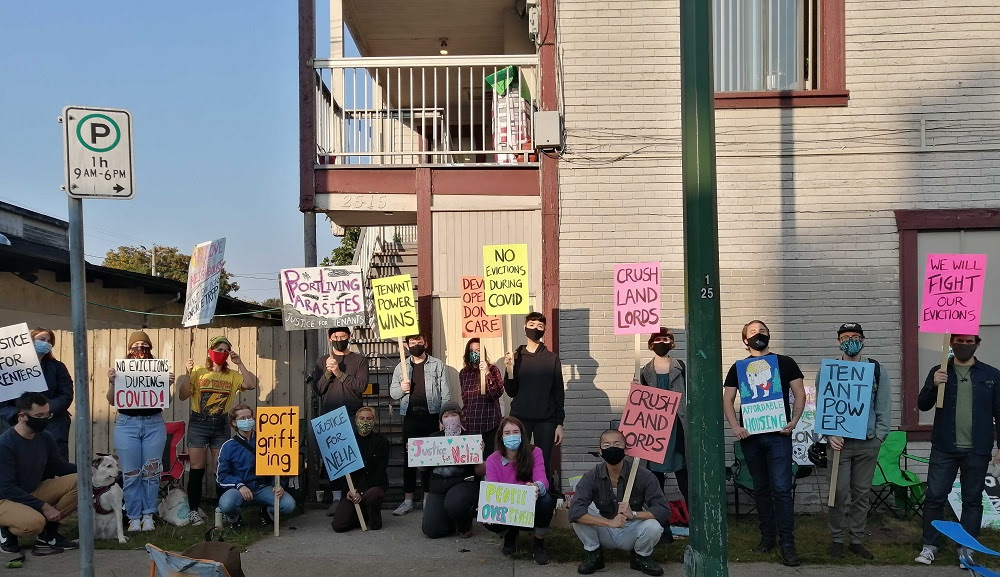 In the Fall of 2020, renters in Mount Pleasant and Vancouver faced off against the developer PortLiving and won. For years, PortLiving had been rapidly growing their property empire in the neighbourhood, displacing working class tenants as they developed luxury condos along the Broadway Corridor. The tenants of Mount Pleasant had had enough. We took on the developer and their allies in Vancouver City Staff knowing that the future of our community was at stake.

Days into August 2020, longtime residents at Broadway–Carolina facing an eviction on October 1 reached out to the tenants union. A week later, the Mount Pleasant Chapter held its first in-person meeting in over a year at Dude Chilling Park. Members of the newly-reformed Chapter passed a motion to commit themselves to taking on PortLiving and fighting the evictions at Broadway–Carolina.

The VTU mobilized daily to mount a community campaign unlike any it had done before. With less than 6 weeks to the eviction, members of the Mount Pleasant Chapter met every Sunday before flyering and postering across the neighbourhood, recruiting residents and retailers to defend the tenants’ homes. Meanwhile, the Union’s Communications Working Group worked tirelessly to collect hundreds of pledges from tenants across Vancouver to join the fight.

After two gruelling months of battling the developer and City Staff for just compensation, we knew that negotiating the terms of the broken Tenant Relocation and Protection Policy was a dead end. The tenants of Broadway–Carolina had suffered the injustice of City policy since the day their apartment was sold. They refused to take the measly buyout stipulated in the TRPP. They decided they would rather be dragged out of their apartment than admit defeat.

The tenants of Broadway–Carolina had secured a new home, but they weren’t allowed to move in until October 8, seven days after the PortLiving’s planned eviction. Despite only needing an extra week in the apartment, the developer and the City refused our pleas for a stay of eviction and were ready to call the bailiff.

The Mount Pleasant Chapter knew we needed to take a stand. On September 30th, the VTU, community organizations, and the Mount Pleasant community held a rally outside the tenants’ homes. We turned out over 150 attendees to block the intersection at Broadway and Carolina and made our voices heard: Justice for renters! Hands off our homes! No evictions on stolen land!

At the rally, the Mount Pleasant Chapter signed over 100 volunteers for a picket line outside the tenants’ apartment, making sure that no bailiffs were able to reach theirs home and evict them. This leap into direct action was a historic first for our union. The community pledged to hold off the City, the developer, and the police from evicting the tenants until they could safely relocate to their new home.

After holding the picket from 8AM to 6PM three straight days, the tenants won a stay of eviction in the courts. This was a major victory for renters in Vancouver. In the days following, the Mount Pleasant Chapter helped the tenants of Broadway–Carolina to move into their new home.

This fight was never just about the homes at Broadway–Carolina. In two months, we fought a hard campaign and took on a major local developer. It’s up to us to keep up the momentum and challenge the unjust policies of the City of Vancouver and the BC Government that encourage developers like PortLiving to trample on tenants rights with impunity.

As an all-volunteer run organization, our membership and volunteers are at the heart of all the success we’re able to accomplish. If you haven’t yet, please consider becoming a member.