At our General Meeting on Sept 19, VTU members moved a motion supporting the following items as our union's priorities during the provincial election:

The motion was presented and passed by members in anticipation of Premier John Horgan calling a snap election, which he did on Monday, September 21st. These demands reflect current and ongoing priorities for VTU member Working Groups in 2020.

Vacancy Control: Advocating for province-wide vacancy control (rent control tied to the unit, instead of a tenancy) has been the focus of the Real Rent Control BC campaign and Working Group/ since 2017. Recently they have worked with members of City Hall Working Group to advocate for vacancy control in privately owned SRO hotel units in Vancouver.

Reinstate the Eviction Ban: In March of 2020 VTU members demanded and won an eviction ban to protect renters and stop the spread of COVID-19. The province has now fully lifted the ban, even as COVID-19 cases are on the rise. The VTU is now tracking evictions as part of our BC Rent Crisis campaign, and members demand the ban be reinstated to protect tenants hardest hit by the pandemic's economic recession from eviction and/or homelessness.

Continue the Freeze on Rent Increases: The province temporarily suspended the 2020 rent increase of 2.6%, but now increases will allowed to proceed in December. As part of our BC Rent Crisis campaign, the VTU has demanded this freeze be maintained until the pandemic is over.

Cancel/Forgive Rent Debts: As part of our BC Rent Crisis campaign the VTU has demanded debt forgiveness for the 80,000+ households who accrued some kind of rent debt since March of 2020. The province's legislated requirements for debt repayment will mean those already struggling the most to pay their base rent will now be forced to pay down their debts too. A recent VTU survey found that many of these tenants are struggling immensely with their mental health and cannot afford basic necessities like food.

Support for the demands of Camp KT and the Namegans 48: The VTU's City Hall Working Group has been working in solidarity with the organizers of Camp KT in Strathcona, and before that, Camp Namegans in CRAB Park. On September 19th VTU's general Membership voted to support the three demands stated in an open letter, which includes building 10,000 units of dignified social housing, returning land around CRAB park to the Musqueam, Squamish and Tsleil-Waututh Nations, building a healing lodge, and dropping all charges on the 48 community members who peacefully protested decampment of Camp Namegans in August.

This is not exhaustive list of policies that would help renters and further the cause of housing justice, however VTU members are encouraged to engage candidates and parties on these points and the needs of renters more broadly.

VTU members have not endorsed any specific provincial party or candidates for the 2020 B.C. election. Such an endorsement would need to be ratified through a special resolution at a general member meeting. 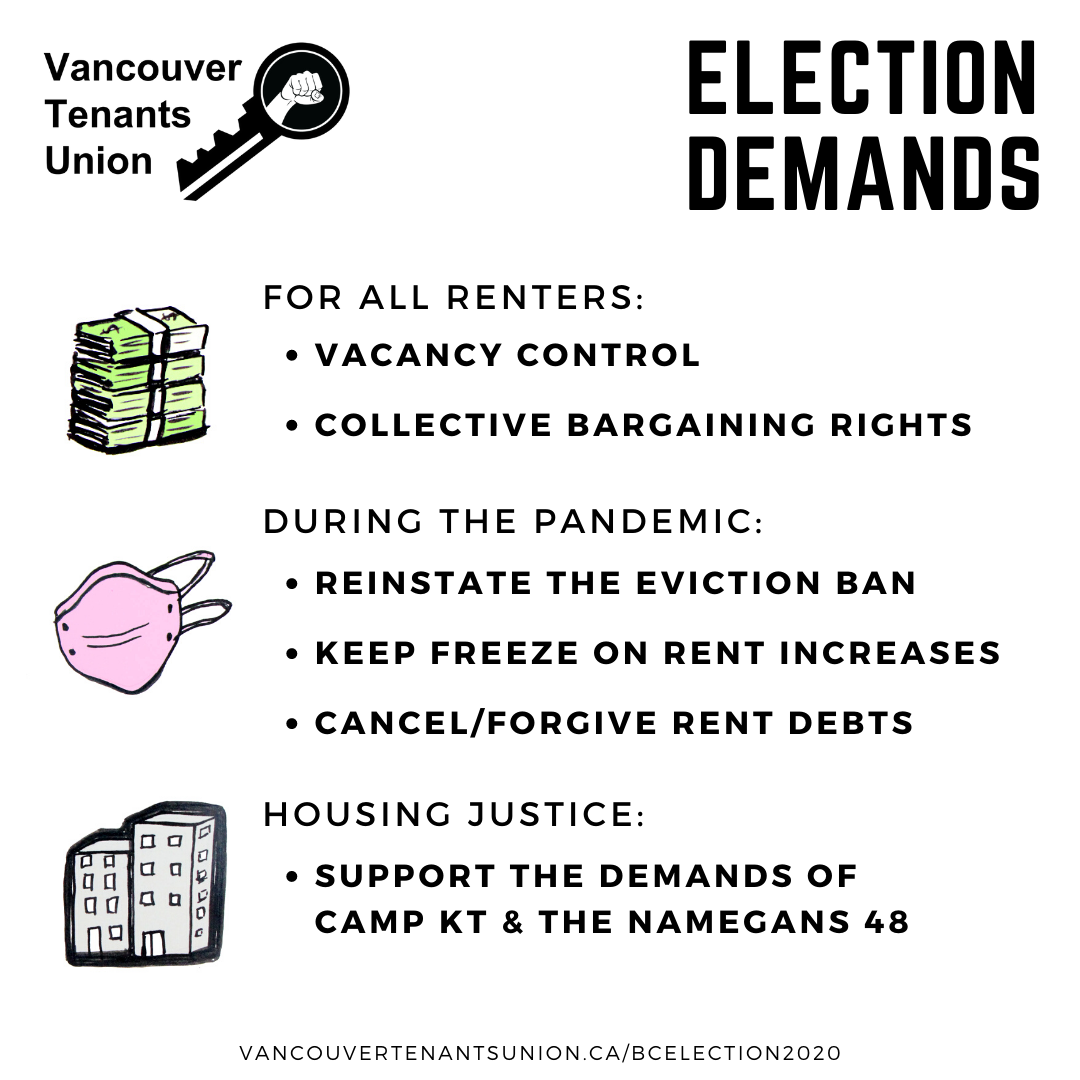