Response to the 2018 BC Budget

The half-measures announced today in the BC Budget are deeply disappointing to Vancouver renters. We take a look at the 2018 BC Budget's responses to Renovictions, Rent Control, Housing Supply and Speculation and what impacts they will have on tenants.

Our supposedly “bold” government still lags a decade behind the Supreme Court of British Columbia, who in 2007 stated that purpose of the renovation provisions of the Residential Tenancy Act were not intended to be used as a means of evicting tenants.

The absence of anti-renoviction provisions which would give tenants the right of first refusal on their renovated units at the same rent is a grave disappointment to hundreds of renters in Vancouver facing imminent renoviction. Especially frustrating is that this language was contained in private members bills from both Spencer Chandra Herbert in 2011 and Melanie Mark in 2016, now apparently abandoned.

We are instead presented with assurances that there will be greater compensation for displaced tenants and after-the-fact penalties for landlords who abuse renovations to evict tenants.

This only sends a message that penalties around renovictions are a cost of doing business for landlords, and that tenants in older rental stock best keep quiet about the maintenance of their units lest their landlord decide to evict them to renovate the entire property.

Additional changes to the Residential Tenancy Act are still desperately needed. Many changes could streamline the Act, increase tenant protections, and reduce the caseload of RTB Dispute Resolution Officers. Requiring automatic arbitration for all evictions would dramatically reduce the common occurrence of tenants receiving frivolous and unsupported eviction notices, and appropriately shift the burden onto a landlord to justify an eviction rather than placing the onus on the tenant to establish grounds for a dispute.

Silence on a the flawed provincial renter’s grant proposal was expected, but we had hoped that this would mean further expansions in rent control. Unfortunately for those receiving SAFER or RAC, their benefits will likely be entirely eaten up by this year’s 4% allowable rent increase. These are wasted funds when the same benefit to tenants could be created by instituting a rent freeze – at no public cost - while the government takes more time to redevelop an effective rental strategy. This would be a step by the government that would acknowledge that renters are already in crisis. A rent freeze would not prevent landlords from exercising their right under the Residential Tenancy Act to apply for rent increases based on unforeseen expenses.

Without a system of vacancy control – which would tie rental rates to the unit, not to the tenant – there will still be an underlying incentive to intimidate, harass, and evict tenants who are paying lower than market rent for their unit. Based on the provisions today, we don’t expect to see any less of this in the coming years.

Action to address affordability is needed immediately. We have already seen average rents increase by over 18.7% in the past 4 years, according to Canada Housing and Mortgage Corporation. We are told that an increase in rental supply and new construction will build the affordable housing on the future. While rental construction has indeed badly lagged over the past thirty years, enabling new construction is a ten year solution. Zoning changes are part of this, but without any reasonable metric of affordability required of new rental development, we will continue to see new units come on to the market at exorbitant rents. Low and middle income tenants need affordable units now, and cannot wait for the supposed indirect “trickle down” effects of increased rental supply.

Tinkering with density in transit zones is of questionable assistance when the experience of transit-oriented development in Vancouver has demonstrated that the value that is publicly created through transit investment is largely being absorbed by private investors, creating additional opportunities for speculation while displacing existing neighbourhood communities and pushing working people further away from the transit hubs on which they rely.

Dedicating housing to Indigenous persons as well as women and children fleeing abuse is an essential start, but the overemphasis on market supply ignores the vast number of vacant residential units in Vancouver which are a product of this speculative environment, and the massive amount of untaxed wealth available for contributing to a new era of social housing construction. BC should be unapologetically taking leadership on constructing non-market social housing to provide security to the most vulnerable, as well as re-establishing a floor on the private rental market.

At the heart of the housing crisis is the treatment of housing as a speculative commodity. Leaders at the federal and provincial level state that housing is a human right but give little effect to these statements. A land-value taxation system and aggressive taxes on property flipping are needed to disincentivize this predatory behaviour.

The property transfer tax on foreign investment increasing by 5% will likely do little to curb speculation. Over a year into its implementation, we've seen housing prices recover from any initial change when the property transfer tax was first applied. What a robust speculative tax should do is capture all revenue gained from flipping property by applying a property transfer tax that depreciates after a short, 1-5 year, period. We worry about the income tax credits for locals paying income tax in BC as this doesn’t face the reality that speculation is not only a foreign investment problem. No one should be able to be “using our housing stock as an investment vehicle that drives up prices and removes rental stock” (Pg 10, Homes for B.C.: A Thirty Point Plan for Housing Affordability in British Columbia, 2018).

Similarly the property transfer tax on homes priced over 3 million could have expanded to a progressive property tax which would serve to build affordable homes for all. BC Assessment reports that the value of all property in BC comprises $1.86 trillion, the vast majority of it on situated on unceded, stolen traditional territories. If the incredible wealth created by our out of control market were taxed even marginally, there would be more than enough money to adequately house British Columbians. The focus should not be on prodding the market to cater to the disappointed expectations of aspiring homeowners with homeowner grants and market supply, but on providing safe, affordable housing to all British Columbians. 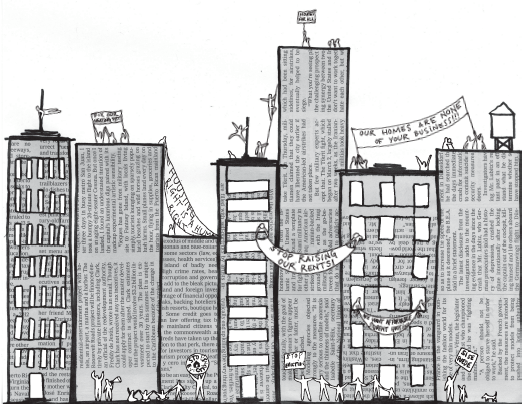